Accordionist Michael Ward-Bergeman once vowed to play a gig every day for a year. That took him through North America, Europe, and Asia. He did it. A gig a day. Maybe on the street, maybe in a concert hall.

You can hear some of these on his GIG 365 album.

During this period Bergeman wrote a Romany arrangement of St. James Infirmary: "When I first heard St. James Infirmary Blues performed live in the back room of a dingy London pub," he said, "I felt it was at once a blues song and something that would feel equally at home with my Roma musician friends." You can clearly hear the Roma instruments (and Roma instrumentalists) on the piece:

Since then Michael has performed this arrangement (or a variation of it) many times, including on recordings with chamber band "Eighth Blackbird," (who the Chicago Tribune declared "one of the smartest, most dynamic contemporary classical ensemble on the planet") and with Yo Yo Ma's "Silk Road Ensemble" (a loose collective of musicians from across the geographical and musical spectrum of the Silk Road, a historical trade route through Asia and Europe).

Which brings us to Rhiannon Giddens. When "Silk Road" recorded SJI for their album Sing Me Home, they brought in Rhiannon for the vocals. Along with the Chinese percussive string instrument, the yangqin, the arrangement includes accordion, cello, shakulute, clarinet, bass, darbuka, violin.

By going to this site: http://compmjwb.blogspot.com/, you can view the Silk Road, featuring Rhiannon Giddens, recording/performing the song,. That's the first selection. The third selection features Giddens live at a 2016 TED conference in Vancouver, with the "Silk Road Ensemble" and with Ward-Bergeman again hoisting accordion.

More western, but no less exciting, here's an energetic duet with Tom Jones:

Maybe Rhiannon should record a variation of SJI with every album. Click here for a link to her latest venture, there is no Other (an exciting album, albeit sans "St.James Infirmary.")
Posted by Robert W. Harwood at 12:30 No comments: 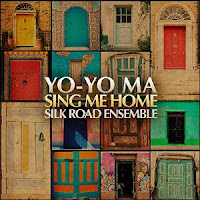 Readers of this blog might recall an entry, three years ago, about a gypsy variation of St. James Infirmary.  The New Orleans composer, accordionist (well, multi-instrumentalist), and performer Michael Ward-Bergeman wrote to me back then: "when I started doing 'St. James' I always felt there was a gypsy music connection both spirit and music-wise." As you can hear on his GIG 365 CD, "St. James Infirmary" sounds ready-made for gypsy musicians. As in much Roma music this SJI begins slow and melancholy, eventually opening into an exuberant, energizing celebration of life that will have you dancing in the streets (or in your living room) - reminiscent of New Orleans funeral music, although with different instrumentation.

Yo Yo Ma and his Silk Road Project commissioned Ward-Bergeman to arrange a version for them. With Yo Yo Ma on cello, Ward-Bergeman on accordion, the Silk Road Ensemble on an assortment of world instruments (for instance, the Roma cymbalom was replaced with a combination of marimba and yangqin, a Chinese hammered dulcimer), and Rhiannon Giddens on vocals, they collaborated on a penetrating version of SJI that transcends both time and place.

The musicians of Silk Road Ensemble are international and eclectic, presenting an amalgam of music that reflects our multicultural world. This new album from Yo Yo Ma and the Silk Road Ensemble will be available April 22. Called Sing Me Home, guest artists include many favourites of mine, including African Kora master Toumani Diabete, North Indian sitarist Shujaat Khan, U.S. banjoist Abigail Washburn, and many many other outstanding musicians from around the globe.

As a taste, here is a just-released video of Yo Yo Ma, Rhiannon Giddens, Michael Ward-Bergeman, and the Silk Road Ensemble performing St. James Infirmary. If this is any indication, the album will be outstanding!


(If you double-click on the video below, you can see it in its proper proportion.)