I Went Down To SJI - in New Orleans

Michael Ward-Bergeman recently sent me a photograph of "I Went Down To St. James Infirmary" situated proudly on a display table in the store "Forever New Orleans." This is the only store in New Orleans in which this book can be found. I think it looks at home.
Posted by Robert W. Harwood at 08:37 1 comment:

Last of the orchestral sheet music: trombone, violin, and bass

A reader recently asked about the trombone parts for the 1929 orchestra score that appears elsewhere on this blog. I had obviously lost track of which sections I had already included, thinking I had posted them all. But, no, I had omitted the trombone, the violin, and the bass parts. So this should do it. Piano. Trumpet. Saxophone. Banjo. Drums. And now, trombone, violin, and bass. 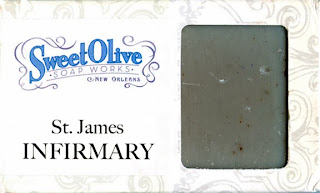 Michael Ward-Bergeman, a well-known musician living in New Orleans, surprised me with a bar of St. James Infirmary soap.  It arrived in the mail this morning. SJI soap? Really? "Yes," I was assured, "really." With reviews such as, "What a great soap!" and "Saved me from psoriasis," the soap is made in New Orleans. The owner of Sweet Olive Soap Works relates that she was born in "the aftermath of the great flood of '78 and was brought home in a canoe on the still-flooded streets of New Orleans." Her grandmother, Anna Mae, had been a soapmaker.

I am going to keep this bar on my bookshelf.


I found myself recalling that there is evidence that Blackface Minstrels performed "St. James Infirmary" in the years before the song was first recorded in 1928. And then I remembered that I own a number of the advertising items pictured above. These are blotters, from the days when people wrote with fountain pens and needed to blot up the wet ink from time to time. I used to use blotters like these. Even when ball-point pens had become popular, teachers felt we had to learn how to write with "proper" pens. Because I am left-handed, my hand would smear the ink across the page as it followed my pen. Teachers did not like that. So, I would place a blotter over what I had just written, and rest my hand upon it. Blotters were very handy. It was a clever gimmick, handing them out as advertisements.

Those blotters are probably from the 1920s, when minstrelsy was being absorbed into and supplanted by vaudeville. They measure about 3.5" by 6". Here, Burns shows his "real" face, and his clown face (our modern-day clowns are really just minstrels in whiteface). "Hi-Brown" Bobby Burns was a minor producer of minstrel shows, and occasionally his name shows up on minstrel or circus advertising even into the 1940s. Judging from the evidence, it seems that Burns, like Emmett Miller, was very late in leaving the profession.