Not long ago, in my continuing research into SJI, I bought some sheet music on eBay. (More about that in an upcoming post.) When the vendor informed me that the sheet music was on the way I wrote back, I don't know why, and told him the reason I had purchased the music. We've enjoyed a few email correspondences since then. He once told me, in passing, that "I forgot to mention that I recorded Porter Grainger's Ain't Nobody's Business...for George Buck's SoloArt label back in 1994. I re-wrote it a bit." Recorded? I looked into that, and lo and behold there he was on emusic, and any number of websites, many devoted to ragtime piano. That's when I found out I was chatting with the Max Morath, who Wikipedia introduces like this: (He) "is an American ragtime pianist, composer, actor and author. He is best known for his piano playing, and is referred to as 'Mr. Ragtime'. He has been a devoted and prolific performer, writing several plays and productions, as well as being variously a recording artist, actor and radio and television presenter. Rudi Blesh billed Morath as a 'one-man ragtime army' . . ."

Max, I found out, has quite a presence in places like amazon.com and eBay - by which I mean he has recorded a lot, written some books, and so on. He seems a tireless fellow who also, I venture to say, feels a primal connection to music of the early SJI period. Max sent me the following delightful anecdote about playing SJI:

Years ago I was working with a melodrama company in Phoenix. After the show I'd stay late at the piano doing requests, hustling the drunks for tips. One night a well-dressed guy staggered over and asked me if I knew St James. I said yes, and sang two choruses -- "I went down..." and "Let her go...etc." He was ecstatic. "Nobody knows that song.!" He stuck a five dollar bill in my cup, (a huge brandy glass) and said he'd give me another five for every other verse I knew. I didn't know ANY more, but I figured by then I knew my donor well enough (and he was blotto enough) that I could increase my evening's net considerably if I took my time and used my imagination. . So I MADE UP three more verses on the spot. I have no idea what they were, but he kept the fives coming!  I venture to say we were both happy.

I'd love to have been there!
Posted by Robert W. Harwood at 18:21 No comments:

MP3 Porter Grainger Song: "Nothin' But A Double Barrel Shot-Gun ('S Gonna Keep Me Away From You)" 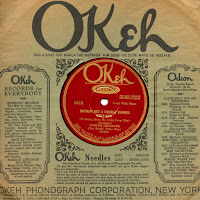 As promised on a posting eight months ago, I am uploading an MP3 of a song Porter Grainger recorded on October 4, 1927. I have found this nowhere on CD (or anywhere else, for that matter).

I set up my old Revolver turntable, connected it to a USB interface and transferred the original 78 rpm recording to my hard drive. I did try to remove some of the scratches and other noises, but decided against it as the result was worse than you will find here.

So here is Porter Grainger, the composer of "Dyin' Crapshooter's Blues," here billed as "The Singin' Piano Man," performing his composition (click on the title) "Nothin' But A Double Barrel Shot-Gun ('S Gonna Keep Me Away From You)" MP3. You can read along if you want - the lyrics are in the post below.
Posted by Robert W. Harwood at 09:23 No comments:

Lyric: Porter Grainger's "Nothin' But A Double Barrel Shot-Gun ('S Gonna Keep Me Away From You)"

I'm mad, I'm mad today
I can't see nothin' but red
So mad yes I'm sad today
I'd just as doggone soon be dead
My gal just said she was through with me
She didn't even say what for
I know there'd been some dirty work,
So here's what I says to her

Neither lightnin' nor thunder don't scare me a bit
Bring on your six-shootin' pistols
I ain't even bothered about it
I'd just take my bare hands and hit a lion on his jaw, grrrrgh
I ain't even scared of a mother-in-law, no sir
Now I'll fight a nest of hornets with four rattlesnakes throwed in
I'll grab a tiger by his whiskers and I'll smack him on his chin
But two long steel barrels with its triggers pulled back
Make me run clean on down the railroad track, yessir
But nothin' but a double barrel shot-gun
Gonna keep me away from you
Posted by Robert W. Harwood at 09:14 No comments:

Well, it feels good to be back on this SJI blog. I have been so busy over the past year renovating the small house Pam and I now live in, here in remote Southern Saskatchewan, that I have had no time to pursue much in the way of other interests. The main house, at a little over 800 square feet, is too small to comfortably accommodate visitors, and so I have worked hard over the summer to turn a shed into a comfortable living area. But winter is descending, the temperature today is -15C (5F), and it is too cold for me to work on further renovations to the small cabin which will eventually serve as our guest house. And so here I am, back at I Went Down To St. James Infirmary, after a pretty long absence.

Correspondent Alan Balfour (thank you Alan!), from the UK, recently wrote a comment on this blog mentioning that he has a copy of the original article that the revered music historian, A.L. Lloyd, wrote for the January, 1947 edition of Keynote: The Music Magazine. Although I had tried, I was never able to find the original article, but did read it through secondary accounts. Alan sent me scans of the original document.

Re-reading this article I was again struck by Lloyd's peculiar logic, for he concentrates on the relation (which is, I am sure, indisputable) between "The Unfortunate Rake" and "Streets of Laredo." Then, through some process of, uhm, magical thinking, inserts "St. James Infirmary" into the mix with very little in the way of transitional or supportive argument. Even so, this is the moment that SJI became fixed in history as a direct descendent of "The Unfortunate Rake."