I am trying an experiment here. A little over two years ago a writer/broadcaster/music-historian asked me to record some monologues about "St. James Infirmary" for a possible radio show. I wound up recording sixteen entries, ranging in length from five minutes to one minute. Topics covered such areas as a history of the "Let Her Go" verse, Fess Williams, Don Redman & Louis Armstrong, The Hokum Boys, Irving Mills, and, of course, the significance of SJI.

The show, to my knowledge, was never produced, and having heard nothing lately I doubt it ever will be. So I have decided to post one, a few, or all of my entries on this blog.

First, though, I want to see if there is interest in this endeavor. I am including the first of those recordings: musings on Carl Sandburg's 1927 book of traditional songs, The American Songbag, which featured the first publication of "Those Gambler's Blues" (and which, as you know, would later become "St. James Infirmary"). This is, at five minutes, by far the longest of the entries. Is anyone interested in hearing more?

To listen, don your headphones and click on: "Monologue on Carl Sandburg and Those Gambler's Blues" MP3
Posted by Robert W. Harwood at 17:50 1 comment: 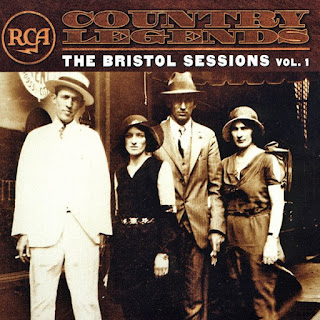 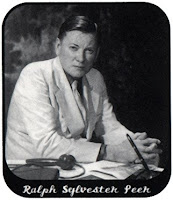 Although “St. James Infirmary” is undoubtedly a very old song, very few traces can be found that predate Louis Armstrong’s 1928 recording. There is the Fess Williams recording of “Gambler’s Blues” the previous year, of course. And Carl Sandburg’s inclusion of two versions of “Those Gambler’s Blues” in his book The American Songbag – also from 1927. A song with lyrical similarities can be found in song collector Dorothy Scarborough’s On the Trail of Negro Folk-Songs. We shall no doubt discuss that one further in a future post, but even if we acknowledge a direct connection that only takes us back to 1925, the year her book was copyrighted.

When researching “St. James Infirmary” I found anecdotal evidence that placed the song in minstrel 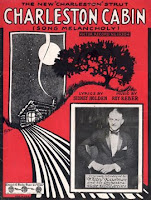 shows around 1916, but not much that was more substantial than that. A little over two years ago, though, Rob Walker posted an interesting discussion about a song titled “In a Charleston Cabin.” It's well worth reading. "In a Charleston Cabin" was recorded – extensively – in 1924. Nothing in the lyric is reminiscent of our song, but the melody reminds one of “St. James Infirmary.” We don’t know, of course, if the melody was borrowed from SJI - but at the very least this extends our excavations back to 1924. (Since writing this over four years ago, I have uncovered much that places the SJI lyric much closer to the turn of the 20th century - RwH.)

For those of you who can read music, I am posting the sheet music to “Charleston Cabin” below. I would be most interested in any comments regarding how closely you find it resembles “St. James Infirmary.” By clicking on the images, you should be able to view larger, readable versions of the files.