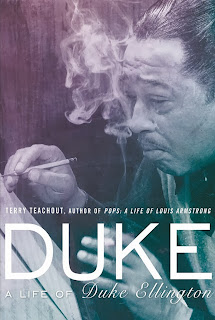 At the recommendation of a friend I recently purchased a new biography of Duke Ellington. Written by Terry Teachout, the book was released a couple of months ago. I was surprised to find, while perusing the "Select Bibliography," my own book, I Went Down to St. James Infirmary, listed. In all humility I have to mention that this was one of close to two hundred books that Teachout listed. But he did write this: "No biography of (Irving) Mills has been written. The best short treatment of his life and work is in Harwood (I Went Down to St. James Infirmary)." Irving Mills, of course, was central to the early career of Duke Ellington, as he was for Cab Calloway and other black musicians of the era.

It is a shame that there is no detailed biography of Mills. Information about him comes in dribs and drabs; what is unearthed often requires considerable effort. And, of course, the longer we wait, the more difficult it will be to write accurately or honestly about the man. A surprising amount of what we do find takes the form of critical opinion, rather than biographical fact, and that opinion is often scathing.

Let me try to explain. Irving Mills was intimately involved in the popularization of what the world thinks of as "American music" - music that arose out of the black culture of the 1920s and 1930s (as well as popular standards from the pens of white tunesmiths). He was foremost a businessman, though, and one who saw opportunity where others - because of the intense prejudices of the time - saw nothing. With the black artists he represented, Mills would take up to 50% of their earnings, rather than the 10% or 15% common between managers and white artists. But in return Mills worked hard. He made Ellington (for instance) into a star, and that could never have happened without a white manager; it might be surprising that it could have happened at all. In other words, Mills charged a lot for his services, but he did not take the money and run, and every indication suggests that he treated his clients with respect. Much of the criticism leveled at Mills is based upon contemporary notions of fairness and racial equality. From the perspective of nearly a century ago, things take on a different sheen.

If you're interested in Duke Ellington, this is a good book to read. Teachout takes an even-handed approach with Mills, and that is refreshing.

A side-light here: none of the three Ellington biographies I have read make any mention of "St. James Infirmary." This even though his band recorded it twice in 1930 - as The Ten Blackberries (with Mills assuming lead vocals under the pseudonym Sunny Smith), and again as The Harlem Hot Chocolates. But, really, it's not surprising. SJI is little more than a small footnote in the history of a man responsible for such standards as "Sophisticated Lady," "Black and Tan Fantasy," "Mood Indigo" and seemingly countless other significant compositions.
Posted by Robert W. Harwood at 14:48 No comments: