Looking for George Clardy (and a bit more about Porter Grainger) 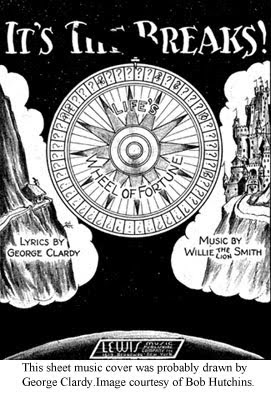 Sometime in the late 1920s or early 1930s, George Clardy co-wrote a song called "Quit Throwin' It, McGivern!" with Porter Grainger. Bob Hutchins, who has commented on this blog about Clardy, is researching his life .

According to Mr. Hutchins, George Clardy was born in Dubuque in 1886. He worked as a lyricist and a cartoonist/illustrator, living in New Jersey and in New York City. He wrote campaign songs for Franklin Roosevelt and Thomas Dewey. Along with Willie "the Lion" Smith he wrote the songs, "It's the Breaks," and "Down in Chicazola Town."

Clardy's aunt was Mr. Hutchins' grandmother. In 1948 Clardy wrote a letter to his aunt, mentioning briefly Porter Grainger (and, separately, Willie "the Lion" Smith). Clardy had suffered a couple of strokes, and this might account for some of the syntax in his letter:
"The enclosed song, 'Quit Throwin' It, McGivern!" was with Porter Grainger. Twenty years ago, Porter put on his colored musical comedy in 'Lucky Sambo.' Like a rest of others cleaned up 2 1/2 Million Dollars when he sold out to Hurtig & Seamon's Theatres. Then he saved his money, bought wisely in real estate in Bowling Greene, Kentucky."

This suggests that Grainger struck it rich with "Lucky Sambo," and invested wisely in his home town of Bowling Green. Neither Mr. Hutchins, nor music historian Elliott Hurwitt, believe that 2.5 million dollars is a remote possibility for a black songwriter of that period. "Lucky Sambo," an all-black musical comedy, had a one week run at New York's New Colonial Theatre in 1925. It might have also had life as a traveling show. It seems that Grainger co-wrote all the music and songs, and probably played piano during the performances.

If you have any information about George Clardy, please leave a message - either at this blog or to Mr. Hutchins himself at upleap79108@mypacks.net.
Posted by Robert W. Harwood at 19:49 3 comments: