Minnie the Moocher: the "controversy" over the Hi-De-Hos 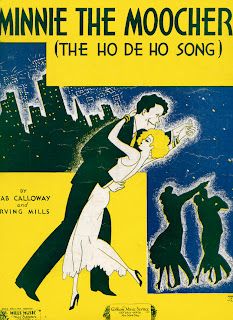 I have a few posts waiting in the wings, so you will be seeing them in close succession. I have chosen this one as the first of these because it refers to the previous post, about a rambunctious, startling, and thoroughly captivating modern New Orleans version of SJI. In that post I wrote that this version by the New Creations Brass Band contains "nods to the 1930s Cab Calloway with the call and response and the Hi-De-Hos."

So, about these Hi-De-Hos (or Ho De Hos . . .). I have written about these before. And I shall add a few more words about them here. But I do want to emphasize that, when I talk about the controversy, I am only talking about a pop song, and that the word "controversy" resides within that realm.

So here we go:

First, "Minnie The Moocher" was based upon two or three other songs - one being SJI (Calloway used SJI as his signature tune in his early days at the Cotton Club and insisted that its replacement should stay close, in the instrumental arrangement, to SJI) and another being an old song from the Wild West, "Willie The Weeper" (from which Calloway and Irving Mills borrowed very heavily). In Cab Calloway's autobiography, "Of Minnie The Moocher And Me" (1976) Cab (with his co-writer Bryant Rollins) said:

"The 'hi-de-ho' part came later, and it was completely unexpected and unplanned. ... During one show that was being broadcast over nationwide radio in the spring of 1931, not long after we started using 'Minnie the Moocher' as our theme song, I was singing, and in the middle of a verse, as it happens sometimes, the damned lyrics went right out of my head. I forgot them completely. I couldn't leave a blank there as I might have done if we weren't on the air. I had to fill the space, so I just started to scat-sing the first thing that came into my mind.
"'Hi-de-hi-de-hi-de-ho. Hi-de-hi-de-hi-de-ho. Ho-de-ho-de-ho-de-hee. Oodlee-odlyee-odlyee-oodlee-doo. Hi-de-ho-de-ho-de-hee.' The crowd went crazy. And I went right on with it - right over the live radio - like it was written that way. Then I asked the band to follow it with me and I sang, 'Dwaa-de-dwaa-de-dwaa-de-doo.' And the band responded. By this time, whenever the band responded some of the people in the audience were beginning to chime in as well. So I motioned to the band to hold up and I asked the audience to join in. And I sang and the audience responded; they hollered back and nearly brought the roof down. We went on and on for I don't know how long, and by the end the rafters were rocking and the people were standing up and cheering."


That sounds pretty straight forward. But, in his introduction to the same book Calloway also wrote, referring to Minnie:
"I don't know how it got started, really, the scat singing. I think one night in the Cotton Club I just forgot the words to a song and started to scat to keep the song going ..."

Hmmm. His manager and co-writer (Irving Mills), on the other hand, was adamant that he, Mills, wrote most of the song, basing it upon "Willie The Weeper," and that the call-and-response had always been an integral part of it, as it had been with "Willie The Weeper." From the link above: "Irving Mills claimed he wrote 'Minnie the Moocher' himself. He completed it in a couple of hours, using one of the Mills Music house musicians to transcribe the melody." Calloway then, according to the 1933 newspaper interview with Mills, “injected his catching musical personality into the piece.”

The image accompanying this post is from one of the first sheet-music covers for "Minnie The Moocher." (Sheet music sales were still a major commercial enterprise.)  The date is 1931, the year Calloway started performing the song and, as you can see in the image below, the scat-singing was already integrated into the song sheet. (Clicking should enlarge the image.) Calloway became known as "The Hi-De-Ho Man," audiences loved responding to his Hi-De-Hos and - from the perspective of his career - "Minnie The Moocher" and its call and response were very important.

This doesn't, by any means, settle the "controversy." But it might help to give it an outline. 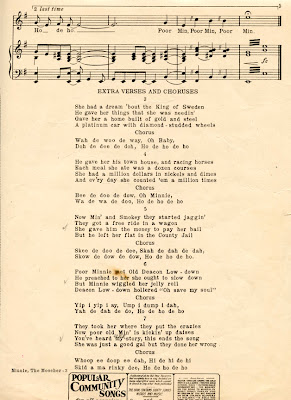