On the Trail of "Let Her Go, God Bless Her"

Just when I thought we were done with tracking the "Let her go, God bless her" lyric from St. James Infirmary, correspondent Richard Matteson sent me a number of emails. Thanks to Richard I have purchased a copy of the 1902 Harvard University Songs. It arrived in the mail today.

In an introductory note the compiler E.F. DuBois wrote that he "has tried to make a collection of songs that are actually sung at Harvard, by the Glee Club, by the crowds at the football games, and by the undergraduates and graduates." The result is a collection of twenty-seven songs starting with "Fair Harvard" and ending with "The Marseillaise." Sprinkled in between are titles such as "The Levee Song," "Jolly Boating Weather," "Bring the Wagon Home, John," and "The Mulligan Musketeers."

"She's Gone, Let Her Go," with its chorus that is so familiar from SJI, appears on page 72. The melody is utterly ordinary, a kind of parlor ditty that one could imagine being sung by hearty fellows in argyle sweaters, gathered around a piano with drinks in their hands. The lyric is the same as that identified in a March 21st entry on this blog, from the 1909 Harvard song book. The fact that it has appeared in at least two of these books, and that it is joined by only twenty-six others in this 1902 book, attests to its popularity at the time - at least among students at Harvard.
If you click on the music sheet here, you should view a larger copy that is easier to read.

While in "St. James Infirmary" this lyric gives the song a sinister quality, here it is as if the singer is saying about a woman who has left him, "It's your loss, Toots." Regardless of the fickleness of love, t 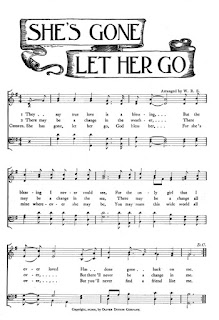 he singer remains constant: "There may be a change in the weather . . . but there'll never be a change in me." One can get the impression that this verse was indiscriminately, to use modern terminology, cut and pasted into SJI - and that the sinister shadow it casts is little more than a careless mistake. Had "St. James Infirmary" waited another ten years for its first recording, perhaps this verse would have dropped away, or been altered.
Of course, the 1902 date of this song does not help in tracking the birth of "St. James Infirmary." In that case, even circumstantial evidence does not take us much further back than, say, 1916.
Many thanks to Richard for this. (Mr. Matteson has a number of interesting areas on the web, including a series of entries on different versions of SJI - one of those pages can be found here: St. James Infirmary - Version 4 Jimmie Rodgers 1930.)
Posted by Robert W. Harwood at 20:51 1 comment:

Paul Whiteman and the Beatles 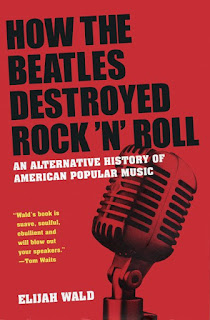 During the years that I was researching and writing I Went Down to St. James Infirmary I exchanged many letters with the big band historian Joseph. E. Bennett. In fact, we continue to write to each other.
Recently I sent him a copy of Elijah Wald's most recent book, How the Beatles Destroyed Rock 'n Roll: An Alternative History of American Popular Music (Oxford University Press, 2009). Having sent the book via amazon.com I quickly wrote him a letter, explaining why I thought he would be the least bit interested in a book about either the Beatles or rock 'n roll. Bennett had played with big bands in the late 1930s and early 1940s. He befriended many of the big band leaders, researched and talked to them about their various histories, and wrote many articles for publications such as the recently defunct Joslin's Jazz Journal. He has an as yet unpublished 500 page history of the big bands, including many photographs, several of his own paintings (such as the one you see here, of "Hot Lips" Henry Busse), and previously unpublished biographical details about many of the band leaders. 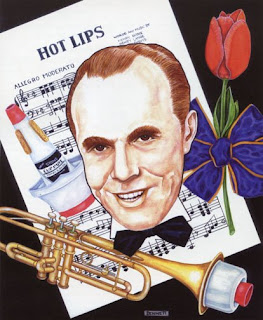 In several letters to me Mr. Bennett noted that histories of popular music generally disparage the types of bands he played with and wrote about. While these bands, parlaying pre-arranged, "sweet" jazz, were by far the most popular and the most long-lived of the bands, it's the "swing" orchestras that are credited as being most representative of the big band era. "The commercial, stylized sound," Bennett wrote, "was criticized as 'Mickey Mouse,' 'corny,' and 'dull' by the swing enthusiasts" but "without exception the swing bands faded quickly while remaining in recorded form as what the big band era was all about."
Paul Whiteman is the most obvious example of this form of historical exclusionism. The self-titled "King of Jazz" was an accomplished, classically trained musician. (In fact, he and Phil Baxter - one of the characters who makes frequent appearances on this blog - served in the navy together during WWI. Neither Whiteman nor Baxter had yet made names for themselves, but Baxter organized a jazz band that he would take ashore when they were on leave. Baxter had no room in his "hot" band for a violin, though, and so Whiteman remained aboard ship.) Whiteman was the most popular band leader for years, often racking up six or seven of the best-selling records-of-the-year during the 1920s and 1930s. In fact, the Joel Whitburn book, A Century of Pop Music, lists no less than 78 Whiteman records among the top 40 rankings between 1920 and 1934.
Writers on music history have their biases, and generally prefer more esoteric performers over the ones who appealed to the masses. Elijah Wald attempts to correct this imbalance in his book, and in fact devotes a goodly amount of space to Paul Whiteman in doing so. Do not be distracted by the title - it's the subtitle that matters here. An Alternative History of American Popular Music is a fantastic read, it moves seamlessly through the eras, and recognizes the common (wo)man as having a powerful influence on the evolution of musical forms.

Joseph Bennett has at times opined that his time has past, that nobody cares about the music that swept the nation for at least two decades of the twentieth century. If Elijah Wald has any say, Mr Bennett will be proven wrong.
Posted by Robert W. Harwood at 08:47 No comments: