I am posting this as a kind of Christmas gift to you, readers of this blog. This post will contain a bit of history, related to (what else?) "St. James Infirmary." And - with a nod to all those who come here for my occasional postings of sheet music - there will also be some, well, sheet music.

I suspect that most readers of this blog know that Irving Mills was intimately entangled with the history of the song "St. James Infirmary" - as the fictional "composer" of the song (Joe Primrose), as the manager of various performers who recorded the song, as the impresario who publicized the song, and as the vice-president of the company that published the sheet music.

In the years prior to the rise of Elvis Presley, sheet music routinely outsold records, and was a major source of revenue for those involved with its publication. It was much more important to retain revenue from sales of sheet music than from the sales of records.

In 1921, the Mills brothers (not the singing group) were struggling publishers. Rising from poverty in New York City, largely on the strength of their ability to promote - or plug - other people's songs, Jack and Irving Mills eventually became owners of one of the most productive and important music publishing companies in North America - Mills Music. Formed in 1919, it was initially called "Jack Mills Inc." and in 1921 the company struck gold. The opera singer Enrico Caruso was the most beloved, revered, and top-selling artist of the era. He had just died, and Jack Mills Inc. bought the rights to a song titled "They Needed a Songbird in Heaven (So God Took Caruso Away)."  The song became so popular that in 1925 Time magazine described it as: "a ditty that was scratched from every phonograph, mewed through the sinus cavities of every cabaret tenor who could boast a nose, caroled by housewives at their tubs and business men at their shaving." (I should emphasize here that "housewives at their tubs" refers not to bathtubs, but to washing tubs -where the laundry was done by hand.)

It is possible that, were it not for this ditty, Mills Music would not have survived to, seven years later, discover and promote a gritty folk song called "St. James Infirmary."

Popular as "They Needed a Songbird in Heaven" was then, I have been unable to unearth a single vocal recording of this song, either by contemporary artists or on CD compilations of old songs. So . . . while it once enjoyed the heights of popularity, it has been forgotten today and, thus, is probably new to you.

So, without further ado, below you can see the three pages of the sheet music from 1921 (which should enlarge if you click on them). Merry Christmas. 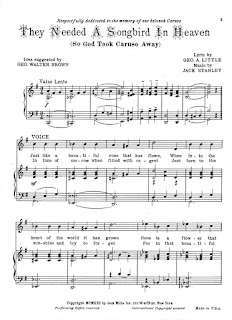 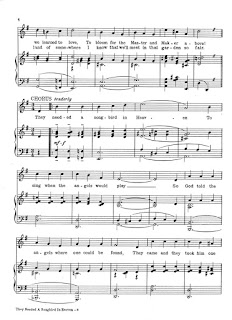 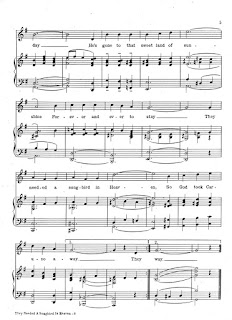