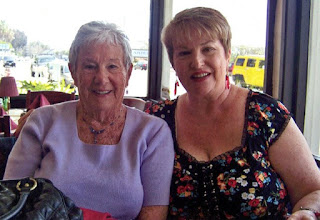 A recent photograph of Marjorie Moore, with her daughter Carol

As readers of this blog, or of the book, know - Carl Moore was credited as co-composer of "Gambler's Blues" when it was recorded by Fess Williams in 1927. "Gambler's Blues" would soon become known as "St. James Infirmary" - and credit for authorship would change; first to Don Redman, and then to Joe Primrose.

But Carl Moore (along with Phil Baxter) was the first of these. He is one of the most interesting of the characters that I explore in I Went Down to St. James Infirmary. After many years as a big band leader - and dapper, tuxedoed, comical hillbilly hick - he became one of the first (and one of the most popular) country music djs. Although he retired in 1969, Dave Sichak's website Hillbilly-Music dawt com announced that in 2008 Carl "Squeakin' Deacon" Moore had the most visited page of the many disk jockeys the site features.

Carl Moore was born in Paragould, Arkansas in 1902. He died in
Huntington Beach, California, in 1985. I telephoned his wife, the lovely Margie Moore, a few days ago. She celebrated her 93rd birthday this past weekend!

In celebration of Margie's birthday, I am posting the fourth - and last - song of Carl's complete recorded output. Much of Carl's inspiration came from the vaudeville and minstrel stages, and this song - written by Paul Carter and C.H. Barker (who are today as obscure as songwriters can get) - was popular on vaudeville. Deacon drawls, the orchestra swings.

To hear this song, click on: "A Woman Gets Tired" MP3. Be warned that a few seconds in it might sound like the recording skips a beat. I edited the file a bit in order to removed a loud click.
Posted by Robert W. Harwood at 18:57 No comments:

The Canadian magazine devoted to folk and roots music, penguin eggs, publishes four times a year. The spring issue has just been delivered to stores, and contains a review of I Went Down to St. James Infirmary.
I consider penguin eggs to be one of the best magazines of its type, and am flattered that they chose to review my book. Here is an excerpt:
“[I Went Down to St James Infirmary] is a fascinating study and anyone who has an interest … in the way songs evolve and are passed along through history will find it an utterly compelling read. This critic confesses to a weakness for this type of book and devoured it with relish over a few days, though it will retain a favourtie place in his library and remain a reference for years to come.” — Barry Hammond, Penguin Eggs, Spring 2009
The complete review can be read here: Penguin Eggs book review.
Posted by Robert W. Harwood at 18:44 No comments: