I can't believe I'm entering three posts in a row about WFHB, in Bloomington, Indiana. This must be quite the happening community radio station.
I have just heard that folklorist Margaret Lynn Steiner will be broadcasting on Tuesday, March 17th - St. Patrick's Day - from 9 to 11 pm (Eastern time). She says that her program will be split between songs from Northern Ireland (where I was born) and songs from Miramichi, New Brunswick (near where my brother lives). Of the former Margaret says, "Newtownbutler, in Co. Fernmanagh, Northern Ireland, had a very active living song tradition, certainly in the late 1970's. Local songs abounded, centering around hunting, Gaelic football,  and cockfighting, as well as songs celebrating the local topography, etc. All I had to do was walk into McQuillan's Pub, and I could just happen on a 'singsong.'"

Regarding Miramichi, Ms. Steiner has been attending their folksong festival since 1986. This is the oldest folk music festival in Canada. Dating from 1958 it has the primary function of preserving traditional songs and culture. One of the treasures of Miramichi has been Wilmot MacDonald, a singer with an impressive store of old songs  - and who is featured on a 1962 Smithsonian recording. Margaret Steiner contributed to a CD and book about MacDonald, that is available from the Maine Folklife Center, University of Maine.
Margaret Lynn Steiner: "Edward D. (Sandy Ives) has done a lot of work on the English-language tradition, especially focusing on 19th-century folk poets such as Larry Gorman and Joe Scott. Ronald Labelle, of the University of Moncton, has worked a lot with the Francophone tradition, and I've been working with singers who are bilingual and bicultural and looking at how they juggle their biculturalism musically."
Folklorists are important people. Song collecting is important work. In this - as Lucas Gonze puts it - age of copyright extremism, we need to broaden our base of inspiration. We need to be reminded that songs can be living things with a vitality and meaningfulness that, in terms of cultural and personal value, far outstrips the monetary lifespan of Mickey Mouse.
So, that's WFHB on Tuesday, March 17th, from 9 to 11 in the evening, Eastern time. I shall be scheduling an audio capture, so I can load it onto my iPod.
Posted by Robert W. Harwood at 20:30 No comments: 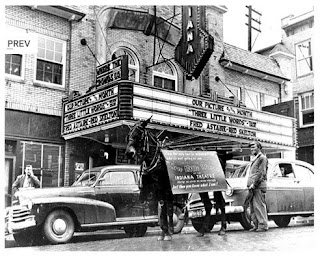 The above image is from the web site of Bloomington, Indiana's Buskirk-Chumley Theater. This historic building will be the site for WFHB's March 27th live broadcast after the style of Border Radio - of interest here because of a) its historical context and b) it promises the first live performance after the style of Carl "Deacon" Moore in perhaps 70 years.

I was doing a bit of surfing this morning, and noticed that WFHB's home page had added the following notice:

WFHB holds live radio show at Buskirk-Chumley Theater March 27th
Remember the days when the radio announcer would say "Who's this on the Wolfman telephone?" or "Put your hands on the radio to feel the power of His love..."? Then you'll want to mark the date for WFHB's Spring Variety Show on Friday, March 27th at the historic Buskirk-Chumley Theater in downtown Bloomington. Local and regional musical acts, radio skits, live sound effects and more will transport you back to an earlier age when preachers, psychics, and purveyors of snake oil prevailed.

There is more detail here.

So, if you happen to live nearby, or are visiting Bloomington, Indiana, the live show is from 8 to 10 pm on March 27th. Those of us further away can catch it via their live feed at www.wfhb.org.
Posted by Robert W. Harwood at 07:31 No comments: