The first song Irving Mills was credited with writing was "Lovesick Blues." First recorded in 1922, Emmett Miller's 1928 version gave it the shape we recognize today - thanks, that is, to Hank Williams' 1949 rendition.

When Miller's record was released, though, it was the flip side, "I Ain't Got Nobody," that received most of the airplay. The poster below is advertising another record Miller released at about the same time, "A Thousand Frogs Sitting on a Log." You might think that's an odd song title, and you'd be right; this was a comedy skit based on the topic of elocution. According to Nick Tosches in his book about Miller, "Where Dead Voices Gather," the skit served as a running gag throughout his stage show. From a newspaper article quoted by Tosches: "Early in the evening the Interlocutor attempted to recite something about a 'thousand frogs on a log.' Instantly Emmett was growling in disgust, 'Can't get no thousand frogs on no log ...' Finally, the mention of 'a thousand frogs on a log' was sufficient almost to throw the audience into paroxysms of laughter." 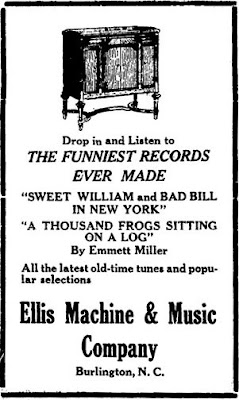 Here, from a North Carolina Newspaper, is a 1928 advertisement for the thousand frogs. You can hear this performance via a download at the website "Western Swing on 78." That download will actually net 23 Miller recordings, about half his total output. The other half can be found here. Among these recordings, by the way, are both the 1925 and the 1928 versions of "Lovesick Blues." The earlier one, with piano accompaniment only, had long been assumed lost. This earlier version of the song sounds unformed to me - as if Miller had not yet imposed his own stamp on it.

Six of those MP3 files yield "The OKeh Medicine Show" - about eighteen minutes of a recorded recreation of medicine show skits and music, in which Miller is but one of the performers. Others included Fiddlin' John Carson, his daughter Moonshine Kate, and Frank Hutchison (a slide-guitar playing, blues singing ex-miner who recorded 32 song between 1929 and 1932). As you can see, Miller was the featured personality in an advertisement for the record.

Emmett Miller appeared in a 1951 film, "Yes Sir, Mr. Bones." An hour long, it tells the tale of a young boy who strays into a retirement home for elderly minstrel performers. Flashbacks allow the film (which actually exists on DVD) to recreate some of the old skits, including this excerpt from YouTube. Here Emmett Miller, now in his 50s and wearing his trademark bowler hat, gives a lesson in blackboard logic.