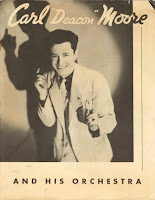 It's time, I think, for another Carl "Deacon" Moore (and his orchestra) song. Like the rest of Moore's entire recorded output, this was recorded for Decca in 1938.

To paraphrase the big band historian Joesph E. Bennett, if one were simply to listen to a Moore performance, one would first hear Deacon's introductory remarks delivered in a broad hillbilly twang - and would expect, upon opening one's eyes, to see a country hick in bib overalls, chewing on a bit of straw. Instead there would stand "a handsome, slender young man immaculately arrayed in a spotless tuxedo, leading an orchestra which was equal in appearance to the most impressive New York ensemble. The band's music was tasteful and modern, with an impressive mix of popular up-tempo numbers and traditional lush ballads, all delivered with an obvious high degree of musicianship."

You can hear all of that in this selection. To listen to this song, click on: "Nobody Knows Where She's Gone" MP3.
Posted by Robert W. Harwood at 16:24 No comments: