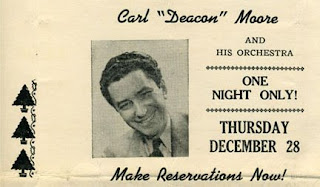 It's been a while since I've posted to the site. I've been involved in a number of projects (that include working on a photo web site - although, truth be told, Pam has been doing most of that).

Anyway, we're long past due for another Carl "Deacon" Moore song. Like the others he made, Waiting for the Evening Mail (Sitting on the Inside Looking Outside) was recorded for Decca in 1938. Originally written by Tin Pan Alley composer Billy Baskette, it was a popular ditty recorded by the likes of Bing Crosby and Al Jolson. This is a tragi-comical song, and Moore does it well. To hear the song, click on: "Waiting for the Evening Mail" MP3.
Posted by Robert W. Harwood at 20:54 2 comments: