The Harry Smith Anthology of American Folk Music is one of the most influential collections of songs on the planet. Originally released in 1952 on 6 LP records, it is now available on a 6 CD set. Dave Van Ronk wrote that "without the Harry Smith Anthology we could not have existed, because there was no other way for us to get hold of that material."

The songs on this anthology were all recorded in the 1920s and 1930s. You can easily hear an example of musical borrowing by playing The Bentley Boys 1929 "Down on Penny's Farm" next to Bob Dylan's very early (1961) "Hard Times in New York Town." Anyway, this map is an attempt to show "the geographical origin of each cut on Harry Smith's 1952 Anthology." It appears on the site of The Celestial Monochord - Journal of the Institute for Astrophysics and the Hillbilly Blues.
Posted by Robert W. Harwood at 12:41 No comments:

Fellow SJI enthusiast Rob Walker forwarded to me a letter he received from Charles Cronin. Mr. Cronin, among other things, runs a website from UCLA devoted to the question of music copyright infringement. This is a such a thorny issue. Music, of course, has a rich history of borrowing; that is essentially how new songs get written. But how to distinguish between borrowing and theft? And, are we in danger of mistaking the former for the latter, in danger of crippling the creative process in the service of business and profit?

This is an extraordinarily ambitious site. You can read an outline of a 1931-1932 court case that figures prominently in my book. This is in the "Case List" section, but it is also informative to browse the "Song List" section, where Mr. Cronin comments with both clarity and humour about specific songs. Read, for instance, his comments on the (in)famous case of "He's So Fine" vs. "My Sweet Lord."
Posted by Robert W. Harwood at 11:55 No comments: 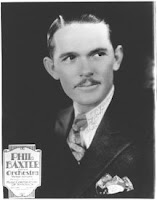 Phil Baxter was a prolific and successful song-writer. Among his better known compositions we can include "Ding Dong Daddy from Dumas," "Piccolo Pete" (and the follow-up, "Harmonica Harry" - both were early novelty hits for Ted Weems and his orchestra), and "A Faded Summer Love" (which was a hit for Bing Crosby in 1931).

Baxter also claimed co-authorship for "St. James Infirmary." He and Carl Moore actually published the song in 1925, but they neglected to apply for copyright. Baxter, a pianist, was unable to perform after 1933 because of arthritis. On the verge of his leaving for Texas, the Kansas City Journal-Post ran a long article about Baxter, one of the town's favourite musicians, which included this comment: "Baxter has had some litigation over the authorship of one song, which has been in circulation as 'St. James Infirmary,' but which he said he composed long ago and called 'Gambler's Blues.' He said he published it privately in Texas years ago, and that a New York publisher picked it up." That New York publisher was undoubtedly Gotham Music, whose president was Irving Mills.

Information about Phil Baxter is very hard to come by. Recordings of his can still be found on CD, but in compilations with titles like volume 2 of Jazz the World Forgot, or Texas and Tennessee Territory Bands. If anyone has information about Phil, or Carl Moore, I would love to hear from you. I understand that Baxter's friend, Cliff Halliburton, wrote a biography of Phil, but I have been unable to find it and suspect it was never published.
Posted by Robert W. Harwood at 10:48 4 comments:

born in 1902. Marjorie Moore, who he married in 1941, is a warm and energetic woman of 92. She remains very affectionate towards Carl, saying "He was one neat guy - very kind and loving and caring." She wrote, "'St. James Infirmary' is a mystery to me, also. I always understood that Carl wrote the words to it." She also remembered "Carl telling me that someone took several songs to Chicago and sold them but did not put his name on them."
Margie sent me a number of photographs and 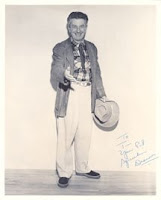 press clippings, including this photo that I did not include in the book. This is Carl as a California country radio dj "The Squeakin' Deacon."
Moore's first radio job was an early morning show on Cincinnati's WLW radio station. This station was originally built to help sell radios and used such a powerful transmitter that it interfered with Canadian radio signals. From Cincinnati the Moore's moved to St. Louis (where Carl hosted a country show called "The Shady Valley Gang"). By 1947 the Moore's made California their permanent home. It is still possible to see Carl "The Squeakin' Deacon" Moore on some of the Bear Family videos of the 1950s country TV show, Town Hall Party, making brief appearances to tell jokes and advertise his Sunday morning amateur hour. On the August 8th, 1959 show you can not only see the Deacon telling a couple of his jokes, but also watch a 27 year old Johnny Cash doing an Elvis impersonation.
Posted by Robert W. Harwood at 09:30 No comments: