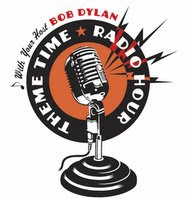 Back in May, 2006, Bob Dylan launched a weekly radio program on XM satellite radio. When Pam and I caught wind of the program, months before the first show aired, we bought an XM receiver. We weren't disappointed. Theme Time Radio can be something of a bonanza for aficionados of early American popular music. While the show leans towards music of the 40s and 50s, Mr. Dylan talks about and plays a considerable amount of music from earlier decades. There aren't many radio programs that can feature Jack Teagarden, Tom Waits, Charlie Poole, Percy Mayfield, Hank Snow, and ZZ Top on the same bill while maintaining a sense of continuity.

It's Dylan's talking that keeps things flowing. Good as his selections are, his patter is often the best thing about the program. He can be thoughtful, serious, self-mocking, sarcastic . . . often very funny. Always reverent. I think of Bob Dylan as one the the great exponents, and authorities, on early American popular music. So it was with some excitement that we listened as his February 20th broadcast veered into a discussion of "St. James Infirmary." The theme for this show was "Doctors" and Dylan said, "One place you’re going to find a lot of doctors is St. James Infirmary. This song’s history is convoluted and fascinating. Louis Armstrong recorded it as early as nineteen and twenty-eight, but it goes back much further. According to one study it got its start as a ballad called 'The Unfortunate Rake'..."

"According to one study," Dylan said. That was wonderful to hear, because most discussions of the song take the assumption of a direct relationship between "St. James Infirmary" and "The Unfortunate Rake" as established fact. That one study was probably A.L Lloyds 1947 article Background to St. James Infirmary Blues. (You can read more about it by accessing this link and searching for the section titled "Tracing a Ballad," a little more than half way down the page.) Far from factual, a direct connection between the two songs is more a tenuous assumption.

A few seconds later, however, Dylan referred to a 1934 song by James "Iron Head" Baker as "the real link between the folk ballad and the pop tune, ‘The Unfortunate Rake’ and ‘St. James Infirmary.’" I suspect this reflects some sloppiness on the part of his research staff, who used Kenneth Goldstein's liner notes to a 1960 Folkways record called "The Unfortunate Rake: A Study in the Evolution of a Ballad" - on which Alan Lomax himself sings the song, "St. James Hospital" - as their primary reference. John Lomax recorded the song (for a while the convict James "Iron Head" Baker served as John's substitute for the recently disaffected Leadbelly) and Alan touted it as a link between the two songs. Actually listening to the songs, however, does not bear this out. One gets the impression that Alan wanted to find a missing link between "St. James Infirmary" and "The Infortunate Rake, " but this is not it.
Posted by Robert W. Harwood at 18:31 No comments: