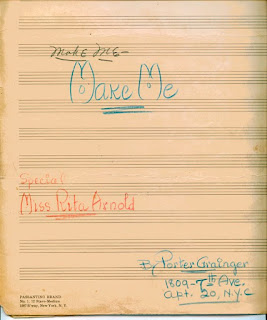 Mr. Walter J. Morrison III, who you can read more about in the post below, noted that at least one of Porter Grainger's hand-written pages of sheet music included his address. Mr. Morrison suggested that if we could discover when that particular song was copyrighted, we would know where he lived that year.

As it happens, the Duke Ellington Music Society (DEMS) contains the following entry: "Make Me Love You, with words and music by Porter Grainger and Jo. Trent, was deposited for copyright on 15Mar27. The song was recorded by Miss Evelyn Preer with Duke Ellington's Orchestra on 10Jan27; the title was never issued and the masters were destroyed; test pressings are unknown."

We now have a number of addresses for the elusive Mr. Grainger:
- The 1925 New York City telephone book notes that Porter Grainger and Robert Ricketts were a song-writing team, with addresses at 2347 7th Avenue, and 1547 Broadway Rm 204, NYC.
- Mr. Morrison's page of sheet music shows that in 1927 Grainger was living at 1809 7th Avenue, Apt. 20, in NYC.
- The 1930 census shows Grainger living at 2 W. 130th, in NYC.
- His World War 2 draft registration gives the same address as above, but notes the street as 120th - I think we can safely assume that one or the other is in error, and that Grainger was living at the same address for at least twelve years.
Posted by Robert W. Harwood at 14:34 No comments:

Does anyone know of Rita Arnold? 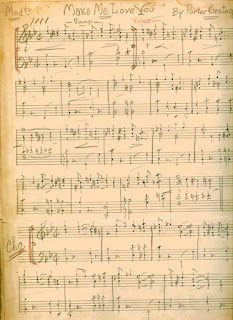 I recently received a letter from Walter J. Morrison III informing me that he owns quite a few pieces of sheet music that were handwritten by Porter Grainger. Many of these were made specifically for a Rita Arnold, who Mr. Morrison believes was a vaudeville/broadway singer. He purchased the music . . . wait, I'll let Mr. Morrison tell the story:

"I don't know much about Rita Arnold. I bought from the estate of - if I remember correctly - her granddaughter, many many years ago, a box of sheet music. It had to have 400-500 pieces. Most I traded off. These were period music sheets, marked with addresses in the NYC Tin Pan Alley, of which I'm sure you're familiar. I was told by the auctioneer that Rita Arnold had been a Broadway/vaudeville actress and singer, but I never pursued it because at the time I didn't know what was in the box.
"In the pieces I've kept, I have a typewritten lyric sheet for the song 'Fit to be tied,' the title of which was edited down from "I'm fit to be tied" (edit is on the page), and is copy-written 1934 . . . I also have typewritten lyrics for a song called 'Try gettin a good nights sleep.'

"The ones that are signed, state they are by Porter Grainger. The ones that are not signed are definitely written by the same hand, but I assume they may not be by him but are adaptations of songs for Rita Arnold, done by him."

It seems that Mr. Grainger wrote some music specifically for Ms. Arnold, and hence the hand written pages. I have searched for information about Rita Arnold, but nothing has turned up. If anyone out there has knowledge of Ms. Arnold, please drop a line. Meanwhile, Walter J. Morrison III was kind enough to send me scans of several pages of this sheet music (one of which you see here) as written by Porter Grainger.
Posted by Robert W. Harwood at 13:46 3 comments: