Blind Willie McTell and the authorship of Dyin' Crapshooter's Blues 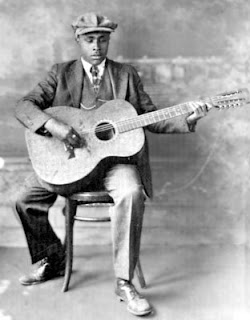 Last November, shortly after we finally published I Went Down to St. James Infirmary, the remarkable Rob Walker posted the first part of a five part interview with me on his blog NoNotes. Those interviews appeared intermittently on his site until January of this year. The interviews cover a lot of territory, from Irving Mills to John and Alan Lomax. The first of them centered on Blind Willie McTell and his famous song "Dyin' Crapshooter's Blues."

Q: One of your many original discoveries is that “Dyin’ Crapshooter’s Blues” is not, as I among many others had assumed, Blind Willie McTell’s re-invention of SJI. Turns out the way he sings that song is almost identical to the way Porter Grainger wrote it years earlier. How did you make that particular discovery?

A: It was a real shock to me when I found out about the earlier versions of Crapshooters’ Blues, Rob, but in retrospect it’s surprising that this is not generally known. I assume part of the reason is that McTell was very convincing when he said to John Lomax on a 1940 recording, “This is a song that I wrote myself . . .” and then in a 1956 recording, to Ed Rhodes, “I started writing this song in twenty-nine, tho’ I didn’t finish it — I didn’t finish it until 1932 . . .” In other words, there is no reason to look for a song’s composer if we know who the composer is.

The first book that I wrote about “St. James Infirmary,” A Rake’s Progress, made the assumption that McTell was completely responsible for “Dyin’ Crapshooter’s Blues.” In fact, the entire history of “St. James Infirmary” as we know it is rife with incorrect assumptions. In the first months after I had finished A Rake’s Progress I discovered that much of what I had written was incorrect. That book followed the well-trodden path, but as I looked more closely at the “facts,” the tale started to unravel. Realizing that one can accept nothing on assumption, I started to reinvestigate the history of the song and rewrite the book. In part, I Went Down to St. James Infirmary is an attempt to correct the record — to place the song in a more accurate historical context.

And so, in this second phase of research, nothing was taken for granted. If I read, for instance, that Irving Mills was born on such-and-such a date, I checked the census records. Regarding the origins of “Dyin’ Crapshooter’s Blues” the information has been fairly easily available since the mid-nineties. In 1990 the Document record label was created by Johann Ferdinand Parth, with the notion of reproducing the complete recorded output of blues and gospel singers from the late 19th century to the early 1940s. This was an immense project to be sure, but by 1995 two of the CDs Document released contained versions of “Dyin’ Crapshooter’s Blues” that had been recorded in 1927. This was two years before McTell claimed he started writing the song, thirteen years before he first recorded it.

These artists remain pretty obscure even today, though, and are unlikely to enter the collections of people interested in the likes of McTell, Charlie Patton, Blind Lemon Jefferson and so on. Some listeners might even consider them to be jazz songs. I think the jazz folk and the blues folk don’t cross into each other’s territory that often — which is odd, seeing as it was all mixed together in a bubbling gumbo at the beginning of time, in the 1920s.

Anyway, I actually found one or two of these old recordings on the jazz site www.redhotjazz.com. In the process of checking all my “facts,” I entered “Dyin’ Crapshooter’s Blues” in their search box and was given a list of artists to search including Ma Rainey, Lucille Bogan, Ida Cox and a host of others who never recorded the song. But eventually it turned up, as did the name of the original composer. As you know, Rob, Porter Grainger is an interesting character. He’s one of those people who have almost been rejected by history, but about whom small scraps of information can still be found. But there’s very little out there. I think the bit I wrote about him in I Went Down to St. James Infirmary triples what was previously known about Grainger.

When I learned about the authorship of “Crapshooter’s Blues” I was excited, of course. But I was simultaneously dismayed. By all reports, McTell was an honest, bright, and well-intentioned man. He did not, however, write that song, and yet he was adamant that he did. This symbolically underscores the relationship we have with everything of potentially commercial value. If something — be it an object, an idea, or a song — can be “owned,” it can be sold. The incessant flogging of songs, particularly when the song grew of its own accord, emerging out of the earth, seems wrong. If enough people can be made interested in something, it’s worth selling. Often it’s worth stealing. And that leaves me wondering if that’s just the way we are, or have we somehow lost our way?