Even as vice-president of Mills Music, president of Gotham Music Service, and music impresario extraordinaire, Irving Mills remained a song plugger at heart. He was a teenager when he first got into the music business and, together with his brother Jack, spent his early years pushing for the success of newly published songs. In 1919 Jack received a $500 bonus for his efforts in publicizing the song Dardanella (and creating, in the process, possibly the first sheet music million seller). This became the seed money for Mills Music, Inc.

In the late 19th century pluggers were known as "boomers," for their ability to belt out a song that could be heard over long distances. They would often sing through megaphones, with racks of sheet music for sale in front of them. Or sit at pianos behind 40 foot counters at the back of a department store, where shoppers could ask to hear samples of the sheet music on sale. By Mills' day the boomer had become a plugger. A good one would become a sort of advertising whirlwind who, in the words of Isaac Goldberg, "by all the arts of persuasion, intrigue, bribery, mayhem, malfeasance, cajolery, entreaty, threat, insinuation, persistence and whatever else he has, sees to it that his employer's music shall be heard."

One of the tools at Mills' command was the recording studio and radio. In 1925 he became probably the first to advertise a song over the radio, when he and one of the songwriters on his staff, Jimmy McHugh, calling themselves "The Hotsy Totsy Boys," performed "Everything is Hotsy Totsy Now." Song plugging for the new electronic age.

Once he secured the copyright to "St. James Infirmary" Mills ensured that it received the widest possible airpl 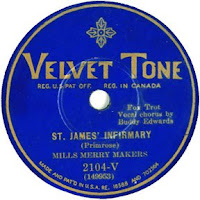 ay - the greater the number of recordings out there the more likely it would be played, the more popular it would become, and the more copies it would sell. (Mills looked at popular music as having a very short shelf life.) So, between his copyright in March of 1929 and the end of 1930, at least 19 versions of the song were recorded. These included two by Duke Ellington and his Orchestra - managed by Mills. For these recordings they were known as the Ten Black Berries, and the Harlem Hot Chocolates. Irving Mills served as vocalist for that last one. Mills Merry Makers (created for recording purposes only), with musicians including Charlie and Jack Teagarden, Harry Goodman (brother of Benny), and Ruby Weinstein recorded a version. Mills could not have had any idea how eternally popular the song would become.
Posted by Robert W. Harwood at 17:51 No comments:

The Power of Song?

This headline graced The Charleston Gazette on March 22, 1936. I suspect a song plugger might have been responsible for it, but that's only a suspicion. The article does make one curious about the song, though.

The occasion was the imminent publication of the sheet music to a Hungarian song called "Gloomy Sunday." The article described it as "a melancholy song supposed to have driven 18 Hungarians to suicide since it was first heard in Budapest six months ago."
The article continued: "Possibly to keep people from diving off skyscrapers, the American music publishers have given it a 'happy ending,' with the soothing line: 'Dreaming - I was only dreaming.'
"Henry Spitzer, who handles the song for the publisher here, said sadly today:
"Some of the Hungarians are supposed to have jumped into the Danube with copies of 'Gloomy Sunday' clenched in their fists, and some turned the gas on after they heard it over the radio for the first time. Most of them left notes saying they felt like the song.
"But I believe Americans are good, sound, healthy stock, and aren't likely to go killing themselves because a sad song haunts them. After all, this is the country where 'St. James Infirmary Blues' made a big hit."
The article then printed the entire song lyric. This would seem to kill my theory that a song plugger was responsible for the article. But . . . the last paragraphs of this newspaper piece went as follows:
"The only known dissenter with Mr. Spitzer's hope that his happy ending will neutralize the gloominess of the song is Dr. William Marston, well-known psychologist. He says changing the words won't make any difference, explaining:
"It's not the words to a song that have an emotional impact. It's the music."
So, if you wanted the complete story, the full emotional experience, you had to purchase the sheet music.
Posted by Robert W. Harwood at 16:38 2 comments: