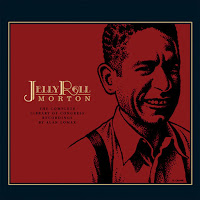 An incredible collection of eight CDs is available from Rounder Records: Jelly Roll Morton - The Complete Library of Congress Recordings by Alan Lomax. Even though there is nothing about "St. James Infirmary" to be found here, this collection is an important - and fascinating - look at music history. I first heard about the collection on Rob Walker's website, NOnotes. Back in 2006 Walker wrote a really interesting series of essays about this set, eight postings over a period of two months. His first one looked at Morton's comments on - a favourite topic of mine - copyright.

I bought this set last summer. Pam and I had spent some time traveling through southern Saskatchewan and Alberta with our friend James, photographing the incredible landscape of these prairie provinces. During a visit to Edmonton I saw this boxed set in the window of a second-hand record store and could not resist it. I had not long before finished reading Marybeth Hamilton's thoroughly enjoyable and illuminating book, In Search of the Blues. In one chapter Hamilton detailed the events leading up to Lomax's recording sessions with Morton, and turned it into a very interesting tale.
In 1937 Morton was living in Washington, D.C. His music was out of fashion, he'd been for

gotten, and his records were no longer listened to; they were essentially worthless. Except to record collectors like Charles Edward Smith and his cronies. One of these cronies, William Russell, nursed ambitions to become a classical composer . . . until he heard his first Morton record. When teaching music composition to a high school class, Russell asked students to bring in records from home. Expecting to easily demonstrate the superiority of classical European music, he was not anticipating the music of Jelly Roll Morton. "From the first bars Russell was hooked. The sheer complexity of the music was what was most immediately striking - the dazzling, rich, polyphonic rhythms, as intricate as anything Arnold Schoenberg had devised but even more vital and free." What Russell was hearing "was so much more imaginative, so much more sophisticated, than anything he could possibly write." Russell became a record collector, hunting for Morton's recordings wherever he could find them.
Shortly after moving to Washington, D.C., Smith entered a dilapidated building on the top floor of which there "was a large, dingy room; the dank, chill air was barely affected by the coal-black iron stove. Only the bar, the jukebox and the battered piano indicated that it was a nightclub . . ." Morton was the bartender as well as the entertainment. He was ill but he could still play with fire. Smith and his friends became regulars at the club, and it was Smith who later introduced Lomax to Morton. Lomax was interested enough to book time at the Library of Congress for some recording sessions over several weeks in 1938. All Lomax had to do was ask a question and Morton, sitting at the piano, responded with a torrent of music and words that seemed inexhaustible. Tales of musicians and hucksters, stories fluid with sentiment or thick with obscenity; a glorious history told in words and music. It's as interesting listening to Morton talk as it is listening to him sing and play piano.
The content of these complete recordings was once the stuff of legend . . . until Rounder Records released this magnificently packaged set in 2006.
Posted by Robert W. Harwood at 16:42 No comments: