The Original Sheet Music for SJI???

This, to the left, is the generic cover of the 1929 sheet music for "St. James Infirmary." The cover was designed so that a performer's image could be inserted without breaking the flow, as in the next picture. In those days images had to be set physically - that is, with an editor's hands placing the components in place. And so it was important for the Mills organization - and everybody else - to create flexible background images. 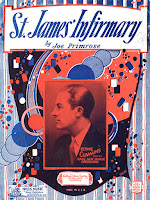 This is the first music score ever released for "St. James Infirmary." In the same year Mills Music (aka Gotham Music Service) also released an orchestral arrangement for SJI (which you can find elsewhere on this blog - search "sheet music"). The Mills music machine was fully engaged. The song had been subsumed.

Ahhh. But while it's the first music score for "St. James Infirmary," the sheet music for "Gambler's Blues," an earlier title for the song, had been printed four years earlier. The composer credits were to, not Joe Primrose, but Phil Baxter and Carl Moore. I wrote a bit about it here: The Golden Grail - you'll find more in the book.

"St. James Infirmary" aka "Gambler's Blues" had been around for many years before being taken into a recording studio. There were a ton of variations. There were many verses. The song, chameleon-like, changed its colour for the environment it stumbled into. The sheet music below, the first of its kind, gives us a taste of the song. But the song was more than this. It assumed many shapes; there were many versions.

This was just one of them. 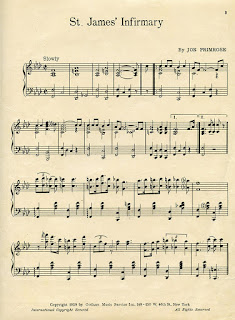 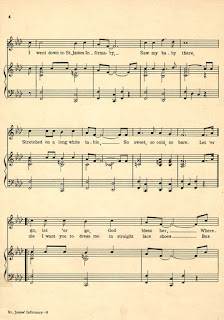 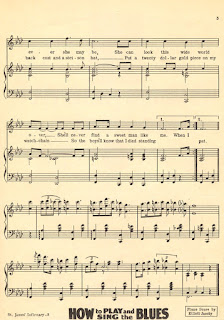 While researching the book I Went Down to St. James Infirmary, I collected quite a few sheet music scores for popular songs of the 1920s and 1930s. While all contained the piano score, most included the chords for ukulele accompaniment. None of this sheet music refers to guitar accompaniment.

It's doubtlessly a truism, but it bears reiterating: everything - including musical instruments and musical composition - is related to something that came before.

Following concerts in the U.S. by some Hawaiian bands, the ukulele became intensely popular in the early years of the jazz era. So, whether the sheet music was for  Phil Baxter's "I'm a Ding Dong Daddy from Dumas," or Cab Calloway's "Minnie the Moocher," or "St. James Infirmary," it was likely to have the ukulele chords included.

Now, what does SJI sound like as played on ukulele?

I recently exchanged some brief emails with Toronto ukulele player, Jennifer Schmitt. She had just posted a recording of the song on YouTube, and was curious about how to credit the composer ... "it was a favourite of my father's. He died ten years ago today, and I used some of my Lake Opinicon time to record this in his memory."

I like Schmitt's treatment of the song. Direct, expressive, and sweetly melodic.

(To view in its proper aspect ratio, watch it on the YouTube channel.)