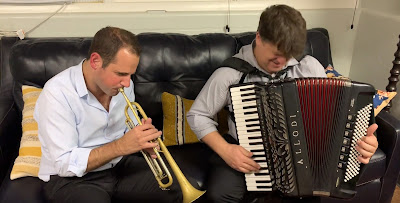 Not long ago friend Michael Ward-Bergeman, renowned accordionist and composer, sent me a clip in which he and celebrated jazz trumpeter Dominick Farinacci, sitting backstage, were caught riffing off St. James Infirmary ... you know the song?

I wrote to Ward-Bergeman, and asked how this came about:

"Dominick Farinacci is a virtuoso jazz trumpeter that  I have been working with off and on for about a decade. Our most recent collaboration has been a sonata for poets and jazz ensemble titled 'Life and Loves,' produced by the Catskill Jazz Factory. We premiered an early version of this in London last spring.

"When Dominick first got in touch about the project he sent a draft program. It was a bit of a shock to see St. James Infirmary on there."

Ward-Bergeman has had a long association with St. James Infirmary. He has performed the song with Gypsy/Roma bands (featuring members of Taraf de Haiduks), with Yo Yo Ma and the Silk Road Ensemble (including Rhiannon Giddens on vocals, Reylon Yount on yangqin), and has performed it, or variations of it, with a number of renowned chamber groups, roots bands, and so on.

"I said to myself " Ward-Bergeman continued, "'I can't escape this song!!'

"In London, Dominick and I worked with another collaborator, multi-instrumentalist Christian Tamburr, in putting the set together and arranging the songs.  We were arranging for a jazz singer and an opera singer.  Someone had the bright idea to mashup St. James Infirmary sung by the jazz singer with the violent Mack the Knife (with German lyrics) sung by the opera singer.  We pulled this off in one arrangement that was a highlight of the London performances.  There are some big things planned for this project over the next couple years.

"Dominick recently invited me to perform with him alongside some of his other collaborators in Easton, MD.  It was a show produced by "Jazz on the Chesapeake."  The program was a kind of 'best of" of the many projects Dominick has been working on over the past few years.

"About a half hour before show time he asked if we could do St. James Infirmary as a duo.  Cool!  After the show we were still messing around with the tune backstage and someone caught a bit on camera.