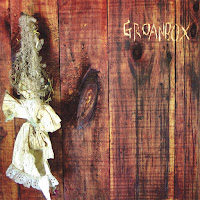 The roots / world music band, Groanbox, has long been a friend of this blog. If you search through these pages you will find them playing “St. James Infirmary” with flair and authority. You will find (from when they were a duo called “The Goanbox Boys”) a song called “Darling Lou,” which has SJI as its base. You will find Groanbox accordionist Michael Ward-Bergeman performing SJI with a gypsy band in Bucharest, and with an experimental classical chamber group in Chicago. And now, Groanbox – grown into a quartet – are celebrating their tenth anniversary with the release of a self-titled CD.

This might be the strangest, the most ambitious of their six releases – and also their most accessible. Two years in the making, it started in 2013 in the forests of Northern Ontario where they found inspiration in the percussive possibilities of fallen trees. “Deep tree diving, oh.” In the echoes of deep bat-rich caves. “Adios Plato.” In the sounds and the quiet of the wild spaces, where a chipmunk took them far from the noise of the Demon Trucks that carry away the harvest of the forest. “Ohhh don’t press your luck, run run away from the demon truck.” In an encounter with a boulder split by the slow-growing root of a tree. “The prisoner of war will break free of the stocks/The root will one day split the rock.” Time spent in an abandoned cabin, said to have once been a hideout for Al Capone. “We’re all dressed in our best luck ... In the older days this room would be filled with smoke ... Ah, I just need a blanket for these bloody finches in my head.” And then into New Orleans earlier this year with its famous ninth ward that is still recovering from catastrophic flooding a decade ago. “Barefoot in the ninth....” With its continuing echoes of Katrina. “Katrina, I wish you’d come and listen to the music coming up through the floor.” That song features guest musician, New Orleans trumpeter Kenneth Terry (written about previously on this blog). Velvet-voiced Venezuelan singer Yulene Velasquez adds vocal flourishes that shape the “The Face That You Deserve” into a sweet exotic charmer. “Each and every drop never stops, till it’s found it’s way/Every single beam finds its meaning in another’s eye.”

There are four instrumental pieces on this album of eleven songs. With titles like “Orchestrated Entropy” and “Graveyard of Pines,” they bristle with original ideas, unusual transitions, atypical harmonies. And with an instrumental arsenal that includes banjo, guitar, assorted hand percussion, accordion, trombone, bells, fife, throat-singing, thumb piano, bird calls, fiddle, piano, and the famous Freedom Boot, these multi-instrumentalists have created a sound that rewards close listening. This is stellar musicianship in which one can hear touches of Eric Satie, gypsy music, African and Middle Eastern rhythms and melodies, blues, New Orleans roustabouts, avant-garde experimentation ... and  much more.

Groanbox took a big risk here. Most of this album was recorded extemporaneously, and the band has rewoven the fabric of their music.

(You can investigate further at the Groanbox site.)


Below, I have been given permission to post an as yet unreleased video about the making of this album. Double-click in order to view it full-frame, or go to YouTube.