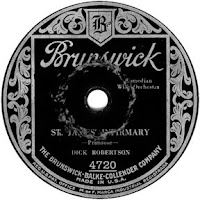 This is a version of St. James Infirmary that, as far as I know, has never been heard except on the original 78 rpm records. It was made somewhere between late 1929 and late 1930 for Brunswick Records. Dick Robertson, the singer, was very popular in that period and recorded with a variety of bands including Duke Ellington and Benny Goodman. It is possible that Irving Mills was his manager for a while, but of that I'm not positive.

If you look closely at the label you will notice that Robertson is referred to as "Comedian With Orchestra." (When Fess Williams performed "Gambler's Blues" in 1927, he was also listed as a Comedian on the record label.) Robertson's delivery might be a little exaggerated, but from my perspective - almost eighty years after the record was made - I don't hear anything that makes me want to chuckle. His take on the song is interesting in that he starts with the complete Armstrong lyric, then he incorporates the changes Mills/Primrose included in his second copyrighted version, and concludes with a verse that is peculiar to this recording. You can hear an mp3 by clicking: "Dick Robertson, St. James Infirmary" MP3.
Posted by Robert W. Harwood at 21:07 No comments:

Visitors to this site (and I know there are one or two) might not be aware that Michael Gray recently published a biography of Blind Willie McTell, Hand Me My Travellin’ Shoes: In Search of Blind Willie McTell (Bloomsbury, hardcover, 2007). It has just come out in paperback. Strangely, it is still only available in the UK.

A biography of McTell must have been a real challenge. Information about him has - until now - been uncertain and, depending upon one's source, contradictory. Michael Gray has accomplished a remarkable feat with this book, which will be a valuable and absorbing read for anyone interested in "roots" music, early blues, Blind Willie McTell or "St. James Infirmary." This is an important book about an important musician. The Sunday Times, for one, calls it “Shrewd, lucid and immensely well informed.”

McTell, of course, was responsible for resurrecting the remarkable SJI-influenced "Dyin' Crapshooter's Blues." McTell actually did record "St. James Infirmary" - in a small Atlanta record store owned by Ed Rhodes. That was in 1956. Unfortunately the CD, Last Session, is incomplete, and so his rendition is not generally available. (Although in 2004 record producers Laurence Cohn and Marino De Silva teamed up to create a box set of McTell recordings that was to include the complete Ed Rhodes tape, the complete John Lomax recording session, and many other treats. People who got wind of this kept their eyes and ears open through 2004 and 2005 and 2006 . . . the web site finally went down in 2008. There are odd rumours afloat about the cause of the project's failure, but the much anticipated box set is dead - and one wonders when these items will come into the light.)

I ordered my copy of Gray's book from amazon.uk and was impressed by both the final cost and the speed of delivery.
Posted by Robert W. Harwood at 08:22 1 comment: