Well, it feels good to be back on this SJI blog. I have been so busy over the past year renovating the small house Pam and I now live in, here in remote Southern Saskatchewan, that I have had no time to pursue much in the way of other interests. The main house, at a little over 800 square feet, is too small to comfortably accommodate visitors, and so I have worked hard over the summer to turn a shed into a comfortable living area. But winter is descending, the temperature today is -15C (5F), and it is too cold for me to work on further renovations to the small cabin which will eventually serve as our guest house. And so here I am, back at I Went Down To St. James Infirmary, after a pretty long absence.

Correspondent Alan Balfour (thank you Alan!), from the UK, recently wrote a comment on this blog mentioning that he has a copy of the original article that the revered music historian, A.L. Lloyd, wrote for the January, 1947 edition of Keynote: The Music Magazine. Although I had tried, I was never able to find the original article, but did read it through secondary accounts. Alan sent me scans of the original document.

Re-reading this article I was again struck by Lloyd's peculiar logic, for he concentrates on the relation (which is, I am sure, indisputable) between "The Unfortunate Rake" and "Streets of Laredo." Then, through some process of, uhm, magical thinking, inserts "St. James Infirmary" into the mix with very little in the way of transitional or supportive argument. Even so, this is the moment that SJI became fixed in history as a direct descendent of "The Unfortunate Rake." 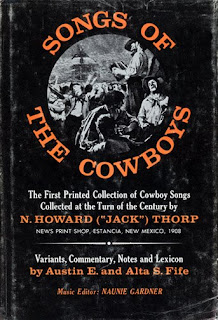 At the suggestion of John Garst (see yesterday's post) I searched for a copy of Songs of the Cowboys. The original edition, by Jack Thorp, was published in 1908. It was a mere 50 pages long, consisting of 23 cowboy songs. That edition contained a version of "Cow Boy's Lament" (aka "Streets of Laredo") that I had not encountered before:

My curse let it rest, let it rest on the fair one
Who drove me from friends that I loved and from home
Who told me she loved me, just to deceive me
My curse rest upon her, wherever she roam.
In this 'new' (1966) edition, Austin and Alta Fife elaborated on the original book, providing commentary and additional variations for each of the songs Thorp published. This edition is almost 350 pages long.
Within the chapter on "Cow Boy's Lament" is a song that I don't think really belongs there, but which is of great interest to me. By this time it had become a common assumption that there was a direct link between "The Unfortunate Rake," "Streets of Laredo," and "St. James Infirmary." And so we find a song called "Old Time Gambler's Song," with a lyric very close to - and very different from - the "St. James Infirmary" that has been popular from 1928 to the present.
One thing that intrigues me about "St. James Infirmary" is the relative rarity of alternate versions. I think this was one of the effects of Irving Mills securing copyright for the song. Because of legal restrictions, and of the immense popularity of the early recorded version, those alternate variations fell into disuse. This song was sent by Terence McKay to Robert Winslow Gordon in a letter dated April 5, 1926. Gordon was a song collector who would, two years later, found the American Archive of Folk Song at the Library of Congress.
Of the versions of SJI that we know, several refer to dying on the ocean, being killed by a cannonball. This song offers a more reasonable "I may die out on the ocean, be shot down in a gambling house brawl." The rest of the lyric is equally interesting.
Posted by Robert W. Harwood at 11:47 2 comments: