of this site will know that Carl Moore is intimately tied to the fascinating history of "St. James Infirmary." I received a telephone call from his wife Marjorie Moore this afternoon. Although we exchanged letters while I was writing I Went Down to St. James Infirmary, this is the first time we've actually spoken to each other. This was an exciting moment, and in celebration I am revisiting one of the earliest posts on this blog.

While Carl Moore was born in 1902 Marjorie Moore, who he married in 1941, was quite a bit younger than him. Margie, now 92, is a warm and energetic woman. About Carl she said, "He was one neat guy - very kind and loving and caring." Whether as a singer and big band leader or as a country music DJ, she says that Carl always had time for his fans. During his later career as a country dj, he hosted an influential amateur show on Sunday mornings. Margie told me that, "After a show people would line up to see him, and he would stay as long as they wanted to talk. He was a down-to-earth guy; he didn't put on airs." When I first wrote to her, asking about SJI, she wrote back, "'St. James Infirmary' is a mystery to me, also. I always understood that Carl wrote the words to it." She also remembered "Carl telling me that someone took several songs to Chicago and sold them but did not put his name on them."


Margie sent me a number of photographs and press clippings, including this photo that 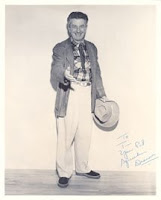 I did not include in the book. This is Carl as a California country radio dj "The Squeakin' Deacon."

Moore's first radio job was an early morning show on Cincinnati's WLW radio station. This station was originally built to help sell radios and used such a powerful transmitter that it interfered with Canadian radio signals. From Cincinnati the Moore's moved to St. Louis (where Carl hosted a country show called "The Shady Valley Gang"). By 1947 the Moore's (Carl, Margie, and their daughter Carole) made California their permanent home. The hillbilly persona he adopted in the dance halls of America served him well in the increasingly popular world of country music. It is still possible to see Carl "The Squeakin' Deacon" Moore on some of the Bear Family videos of the 1950s country TV show, Town Hall Party, making brief appearances to tell jokes and advertise his Sunday morning amateur hour. On the August 8th, 1959 show you can not only see the Deacon telling a couple of his jokes, but also watch a 27 year old Johnny Cash doing an impersonation of Elvis Presley.
Posted by Robert W. Harwood at 21:06 6 comments: