And yet another "Let Her Go, God Bless Her" post

Over the past three months I've written at least six posts focusing on songs containing the "Let her go, God bless her" lyric so famous in "St. James Infirmary." These have ranged, chronologically, from their appearance in a 1909 university song book to a recording by the Louvin Brothers in 1958. Thanks to readers of this blog, I have two more examples to share in this, yet another posting about "Let her go, God bless her."
Reader Jesse said "Nelstone's Hawaiians recorded a song called 'You'll never find a daddy like me' which has the same chorus and is contemporary to or earlier to the Burnett & Foster recording." Jesse added that s(he) had only heard it on 78 rpm record.
The Rutherford and Foster song, "Let Her Go, I'll Meet Her" was recorded in 1929. The song Jesse referred to, by Nelstone's Hawaiians, was recorded September 21, 1928. Neither Hubert Nelson nor James Touchstone were Hawaiian. They came from Alabama, they sounded like they came from Alabama, but their music featured wonderful Hawaiian-style guitar playing. Our friend "The Old, Weird America" has an excellent article about them, which you can access here. You will also be able to listen to "You'll Never Find a Daddy Like Me;" keep an ear out for:
There's been a change in the ocean
There's been a change in the sea
If they'll give me back my sweet mama
There'll probably be a change in me 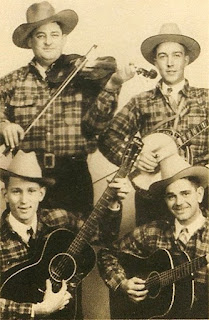 Reader Root Hog Or Die informed me about the version by Rutherford and Foster, which I covered in an earlier posting. He also mentioned "J.E. Mainer and his Mountaineers (pictured here), of North Carolina, who did a version of 'Let Her Go, God Bless Her,' from 1935, that also bore the 'Sometimes I live in the country ...' verse, but otherwise employed all different - although equally common - floating verses."
One of those "floating verses" again includes mention of the ocean:
She may ramble on boats on the ocean
She may ramble on boats on the sea
She may travel this wide world all over
But she'll never find a friend like me
According to liner notes for the JSP CD J.E. Mainer - The Early Years, as a teenager Mainer labored in the cotton mills. He was an experienced banjo player, but one day watched a man playing fiddle while leaning against a telegraph pole at a railway crossing. As he walked across the track, the man was hit by an incoming train. Mainer returned to the scene that evening to find the broken fiddle lying in a ditch. He got it repaired and learned to play it - that might be the same fiddle he's holding in this photograph. Fiddle, guitars and banjo - those are the Mainer Mountaineer instruments. Mainer's fiddle playing is one of the highlights of "Let Her Go, God Bless Her."
Posted by Robert W. Harwood at 20:41 No comments: