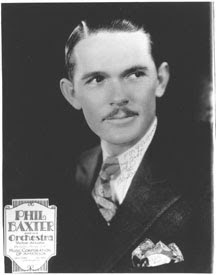 Today, I'm revisiting an earlier post about Phil Baxter, a pianist and band leader who was active in the 1920s and 1930s. Phil Baxter was a prolific and successful song-writer. Among his better known compositions we can include "Ding Dong Daddy from Dumas," "Piccolo Pete" (and the follow-up, "Harmonica Harry" - both were early novelty hits for Ted Weems and his orchestra), and "A Faded Summer Love" (which was a hit for Bing Crosby in 1931).

Baxter also claimed co-authorship for "St. James Infirmary." He and Carl Moore actually published the song in 1925, but they neglected to apply for copyright. It is possible that around 1921 Baxter and Moore toured together as a duo.They would ride the train from town to town and perform skits and music, with Moore on drums, Baxter at the piano. Baxter eventually settled in Kansas City where, leading the house band at the El Torreon ballroom, he displaced the Coon-Sanders Nighthawks as Kansas City's favourite dance orchestra.

Baxter was unable to perform after 1933 because of arthritis. On the verge of his leaving for Texas, the Kansas City Journal-Post ran a long article about Baxter which included this comment: "Baxter has had some litigation over the authorship of one song, which has been in circulation as 'St. James Infirmary,' but which he said he composed long ago and called 'Gambler's Blues.' He said he published it privately in Texas years ago, and that a New York publisher picked it up." That New York publisher was undoubtedly Gotham Music, whose president was Irving Mills.

Information about Phil Baxter is very hard to come by. Recordings of his can still be found on CD, but in compilations with titles like volume 2 of Jazz the World Forgot, or Texas and Tennessee Territory Bands. If anyone has information about Phil I would love to hear from you. I understand that Baxter's friend, Cliff Halliburton, wrote a biography of Phil, but I have been unable to find it and suspect it was never published.
Posted by Robert W. Harwood at 22:18 2 comments: