Well - as you can see from the comments section of the previous entry, the response to my question, "Is anyone interested in hearing more?" is a resounding "YES!" In fact 100% of respondents voted this way.

So, dear listeners, here is part two of this blog's SJI audio monologue series. In this episode, continuing where we left off, we consider some - and I emphasize "some" - of the history of the "Let Her Go" verse in SJI. It's about three minutes long. To listen, click on the following: "Let Her Go" MP3.

Next time, we'll take a break from these aural discussions and look at something else entirely.
Posted by Robert W. Harwood at 22:01 No comments:

One more "Let Her Go" lyric

Over the past couple of months we have looked at several turn-of-the-twentieth-century songs that contain the infamous "Let her go, God bless her" lyric. Here's one more. (Many thanks to Root Hog or Die for telling me about this one!)

In 1929 the fiddler Leonard Rutherford and the guitarist/singer John D. Foster teamed up to record a handful of tunes for Gennett Records. One of those songs bumps into "St. James Infirmary" at least a couple of times.

The chorus of "Let Her Go, I'll Meet Her" sounds familiar:

The song is also one of the few that reflect the odd sailor verse that appears now and again in versions of SJI. Mattie Hite, for instance, phrased it like this:

I have a ship on the ocean
A boat that sails on the sea
A pretty girl that lives in the country, boys
Has sure made a fool out of me

Admittedly, those are fairly far apart, but close enough to be entered into the list of possible influences in the early evolution of "St. James Infirmary."

As with the Louvin Brothers version (see below), "Let Her Go, I'll Meet Her" contains the "Sometimes I live in the country" verse which is most famous as part of Leadbelly's "Goodnight, Irene."

"Let Her Go, God Bless Her" mp3 - the Louvin Brothers 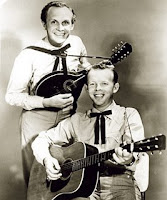 This is a bit of fun. The Louvin Brothers once recorded a song called "Let Her Go, God Bless Her." It's from a 1956 album titled Tragic Songs of Life, and completely different from the song posted above. From some of the recent posts here, one gets the impression that the "Let Her Go" chorus from "St. James Infirmary" served as the structural cornerstone for a number of songs.

Well, that SJI chorus is here in full, and you will also recognize, unchanged, a verse from Leadbelly's "Good Night, Irene."

This is an infectious little ditty. To hear this song click on: "Let Her Go, God Bless Her" MP3.
Posted by Robert W. Harwood at 21:06 6 comments: