From Porter Grainger's World War One song, discussed in the previous post, we move to another song rooted in the Great War.

"Hinky Dinky Parlay Voo" (also known as "Whatever Happened to the Hinky Dinky Parlay Voo?") was published by Jack Mills Music in 1924, six years after the end of the "Great War." It is based on a very popular WWI song, "Mademoiselles from Armentieres" that was sung by British soldiers as they marched towards battle. "Mademoiselles" was itself based on a song popular with troops during the Boer War in the 1880s. These songs were in the public domain.

While "Mademoiselles from Armentieres" had its popularizers, the marching song was far too blue for public performance back home. The troops would improvise verses while on the march; sex and the dark humor of war dominated the lyrics.

A typical, mild version of the lyric went like this:

For the 1924 release, Irving Mills got together with Al Dubin (posthumously inducted into the Songwriter's Hall of Fame in 1970), Jimmie McHugh (also inducted into the Hall of Fame in 1970, a year after he died), and Irwin Dash (not much is known about Dash, but under the name Fred Heatherton he later wrote "I've Got a Lovely Bunch of Coconuts"). The sheet music cover boasted "With twenty new choruses!" From reading the lyric, one gets the impression that many ex-soldiers actually missed the war (or maybe the writers were being sarcastic?):

The lyrics - devised for a popular audience - could be fodder for researchers into social attitudes of the time. For instance, both Uncle Tom and the devout and devoted Eliza (or Liza) were the central black characters in Harriet Beecher Stowe's Uncle Tom's Cabin:

Do you ever think of the time
When all the boys went 'cross the sea
To the land of Wee Wee Wee,
Where they strolled with sweet Marie,
Then the boys came back with a song 'bout
"Hinky Dinky Parlay Voo"
If you don't recall the song at all
I'll sing it over for you (shout) Say!

I wonder how well this sheet music sold? You can read the "twenty new choruses" here (clicking should enlarge): 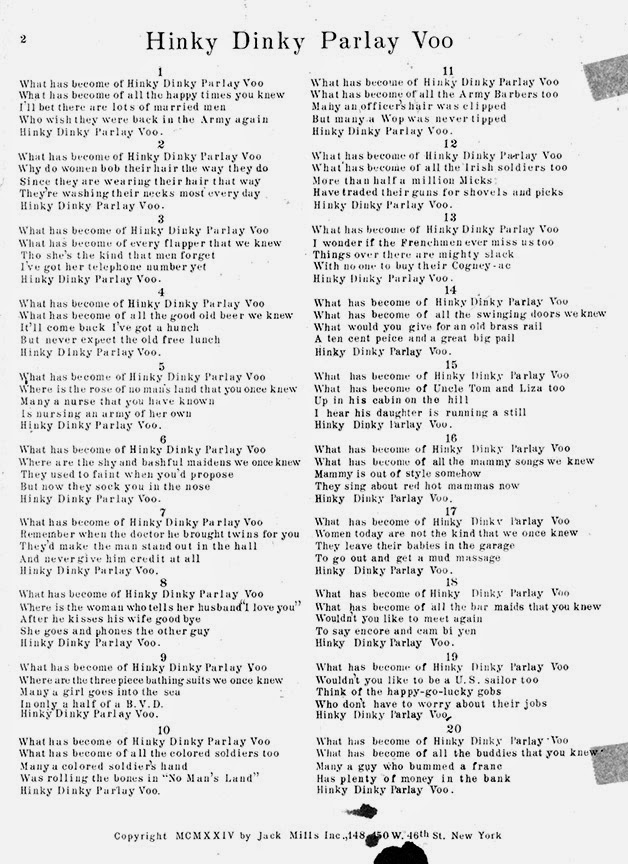