I have been searching Library of Congress copyright records for an article I am writing about the original Carter Family. I took some detours into "St. James Infirmary" territory; here are actual song copyright entries for some of these songs.


The first version of SJI to enter the copyright books was "Gambler's Blues," in 1925. While credited to Carl Moore and Phil Baxter, this (under the title "Those Gambler's Blues") was collected as a traditional song by the poet Carl Sandburg, in his 1927 book The American Songbag. Hmmmm.

This copyright, to the fictional Joe Primrose, was registered in March, 1929.
The recording, by Louis Armstrong & His Savoy Ballroom Five, was recorded in December, 1928 - three months earlier than the copyright. Something was afoot.

"Dyin' Crap Shooter's Blues" was recorded three times in 1927, and then abruptly forgotten ... until resurrected by Blind Willie McTell in the 1940s. McTell was very convincing when describing how he wrote this song - but, obviously, he didn't. Bob Dylan's lyric for his song, "Blind Willie McTell" - "I'm standing in the doorway of the St. James Hotel" - was partly responsible for the writing of this book, I Went Down to St. James Infirmary.
Posted by Robert W. Harwood at 16:08 3 comments:

It might get better than this, but one wonders how.

Friend Michael Ward-Bergeman composed this brilliant interpretation of St. James Infirmary and is also the accordionist in the video. From the Vancouver TED talks in February 2016, the Silk Road Ensemble cooks at a high heat and the vocalist, Rhiannon Giddens, grabs the song impeccably. Together they run through fields and marshes, howl through trees, bend with the wind, fly across oceans and deliver an interpretation of St. James Infirmary that is fit for the world wherever we are. 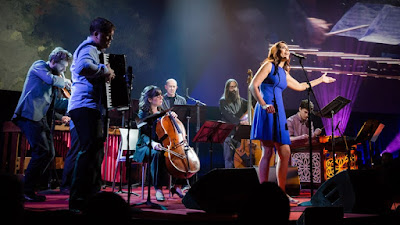