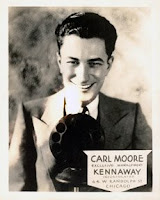 When, in 1927, Fess Williams and his Royal Flush Orchestra made the first recording of "St. James Infirmary" it had the title "Gambler's Blues." The record label showed a writing credit to Moore-Baxter. Carl Moore and Phil Baxter had published the song two years earlier, when both were members of Baxter's band.

Carl was a drummer. By 1927 he had left Baxter's band and was leading his own orchestra. Born in Arkansas, Carl Moore adopted the role of the hillbilly hick, injecting jokes and skits into all his performances. He recorded, for Decca, only four songs in his career - and while he performed "St. James Infirmary" throughout his band career, he never recorded the song.


During World War II, when it became impossible to maintain a touring orchestra, Moore became a radio disc jockey, specializing in the newly emerging country music. Moore always maintained that he wrote "St. James Infirmary."
Posted by Robert W. Harwood at 22:39 No comments: