The British folklorist, Richard Jenkins, first sent me an email in 2008, in which he asked, "Where, in the whole saga, would you place 'Gambling Blues,' recorded on 16 Jan 1928 by Buell Kazee, from Eastern Kentucky?" That was an important question, and led me to a reevaluation of the chronology of SJI recordings.

I was glad to hear that, earlier this year, he was chosen to deliver the annual Katharine Briggs memorial lecture for the revered Folklore Society in London, England.

Jenkins' lecture focused on the song The Unfortunate Rake, tackling it from at least three perspectives. The one most pertinent to this site: Is there a relationship between The Unfortunate Rake and St. James Infirmary? Jenkins said,"As far as I know, Harwood was the first to question the link between St. James and The Rake." He's right. And, as he suggested, this was not an easy thing to do. When the authorities, the folklorists and scholars, have settled on an explanation, who dares to question their conclusions? Jenkins investigated this conundrum.

Which leads to another of Jenkins' approaches to this Rake controversy. Can scholars lose objectivity as a result of their own desires and biases? I wrote in I Went Down to St. James Infirmary that "each folk music researcher has his own motivation for undertaking the work, and this will influence both what he looks for and how he interprets what he finds." In his lecture Jenkins went more broadly into this: "There is also the role of what psychologists call 'confirmation bias': the role of preconceptions in the selection of evidence and the encouragement of unsupported, and often unacknowledged, speculation ... people find what they are looking for and what they already believe in, even if, in extremis, doing so requires fraud or invention." His elaboration on this theme is engrossing.

Jenkins also raised the question of The Unfortunate Rake's title. He explained the history of a song known, historically, as The Unfortunate Lad, and asked why a 20th century researcher might have been tempted to alter the title to something, well, a little more rakish. His discussion about this is both involved and thought provoking.

Jenkins's piece roams over much more territory than I have suggested in these few words. You can read his lecture here: The Unfortunate Rake's Progress. Highly recommended!

Richard Jenkins can be contacted at  r.p.jenkins@sheffield.ac.uk

PS Further thanks to Dr. Jenkins for saying, during his lecture: "Harwood's is the fullest account of the history of 'St. James Infirmary' and its relationship to other songs that we have." I wish I'd had his lecture as a reference when writing I Went Down to St. James Infirmary.

Here, a bit of fun - The Copperfield Ensemble use the word "infirmary" but, hey, it's the 21st century. Nicely done. 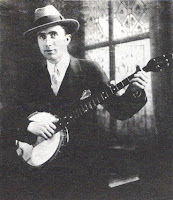 I recently received a letter from Richard Jenkins, who lives in Sheffield, England. Richard is one of those rare souls who has made a study of SJI; he had just finished reading I Went Down to St. James Infirmary and was kind enough to write, "I've really enjoyed it! Brilliant." He then asked, "Where, in the whole saga, would you place 'Gambling Blues,' recorded on 16 Jan 1928 by Buell Kazee, from Eastern Kentucky?"

Buell Kazee is not a name one would easily forget, so I had to admit that I'd never encountered him before. Although that's not quite true. I am very familiar with songs on Harry Smith's Anthology of American Folk Music that were performed by Buell: "East Virginia," "The Butcher Boy," "The Wagoner's Lad." I'd never noted his name, though. Thanks to emusic.com I was able to download Gambling Blues and am amazed. This is, lyrically, very similar to the song that Carl Moore (from Arkansas) and Phil Baxter (from Texas) - both white musicians - put their names to and which Fess Williams recorded in March, 1927. Kazee's recording date of January 1928 makes it, chronologically, the second recording in the "St. James Infirmary" canon, effectively moving Louis Armstrong into third place.

Kazee hailed from Eastern Kentucky. For the sake of posterity he transcribed the traditional songs of his family and neighbours, and recorded about fifty of them between 1927 and 1929. His "Gambling Blues," while lyrically similar to "Gambler's Blues" and "St. James Infirmary" has a different melody, a kind of simple rhythmic chant reminiscent of mournful Appalachian ballads.

What does this mean? Certainly it gives credence to the notion that SJI was all over the map in the first decades of the twentieth century. Where did this version spring from, though? Perhaps "St. James Infirmary" was originally a hillbilly song - or came to America from Britain fully formed.

But "crapshooters," "jazz band" - do these sound like lyrics from an indigenous Appalachian song? Also, that sudden change - without transition - between the fourth verse (her funeral) and fifth verse (his funeral) is odd. It's as if the verse that usually starts "When I die I want you to bury me," had been misplaced. Perhaps the song was adopted by Tennessee townsfolk after a minstrel show breezed through the region. Kazee's discography from 1927-1929 contains cowboy songs and original compositions, so he was not recording only regional tunes; perhaps he'd simply picked this up on his travels. Perhaps . . . there could be any number of possibilities. Do you have any thoughts on this?
Posted by Robert W. Harwood at 19:31 No comments: