The Mysterious E and SJI

Many familiar with this site are also familiar with NO Notes - the other (presently paused) blog dedicated to St. James Infirmary and created by author Rob Walker. In NONotes, which I followed assiduously, Rob often referred to a person called "E."

E was a mystery.

A little later Pam and I read Walker's book "Letters from New Orleans" (profits going to victims of hurricane Katrina). Before Pam and I were finally able to travel to New Orleans, we read a lot of books about the place. As it turned out, Walker's was the best of the lot. A good read, in Letters from New Orleans the mysterious E kept popping up. Who the heck is E???? I became convinced that she went deep, beneath the waves.

I stumbled upon something unexpected, as these web searches go. E once lived in Savannah, Georgia, near military bases. She saw soldiers in shops, on the street, some recently returned from Iraq or Afghanistan. The artist in her must have asked, "How do you represent these people as individuals?" 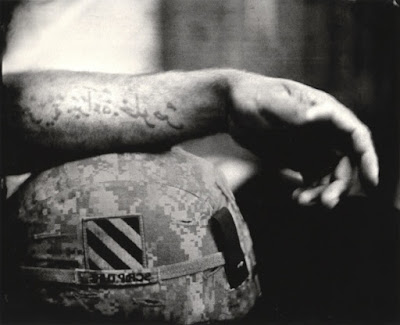 Have you seen 19th century photographs, in which the subjects stare seriously back at the camera? In those days a portrait required a long exposure. One minute. Two minutes. It is almost impossible to hold a smile for that long. And so our ancestors appear to have been somber people. Photographically, a smile was a rare thing. In photos of civil war soldiers, they had this same demeanour ... although one could ask if they had much to smile about, anyway. Today, of course, we can take a dozen photos a second, and then choose the most attractive - perhaps a transitional expression. I would argue that the held pose, in which one does not move for a minute or so, is more resonant. More representative of the person. More revealing of the subject, more responsive than is possible with our digital fastness. You can't pretend for that long.


Eventually Pam and I met E. She and Rob were living in New Orleans. We knocked ... she answered. E. The mysterious E stood in the doorway and ushered us in.

Of course we chatted about St. James Infirmary. E cued up The White Stripes.

Sometime during the evening I asked her for her favourite recording of St. James Infirmary. She said something, I said something, and afterwards neither of us remembered. But, when I wrote to her later, she did recall the Hot Eight performing the song in New Orleans ... "I have a vivid memory of that performance and song. It was skillful, raw, and moving, in part because the performers were so young, so local, and so convincing in the way they sold the song. It was a magical, divey, sweaty evening. I don't think hearing a recording would have the same effect, but if a live performance can be said top be a favourite, I guess I could go with that."

So, here's the official video of Hot 8 - of course not what E experienced in a live performance. But you'll get an impression.


Some of E's collodion images have been selected for display, at huge size, in The National Museum of the United States Army, in Virginia. Slated to open in June, 2020. here's a rendering of the "Army and Society" section of the museum, where E's portraits will be featured..

A reader recently reminded me of Betty Boop and St. James Infirmary.

Back in the 1930s, because of his contributions to the animation department at Fleischer Studios, cartoonist Roland Crandall was given free reign to develop his own notion of a cartoon story. He chose the tale of Snow White (the title of his creation) and, working alone for six months, single-handedly drew and formatted a seven-minute fable of delirious invention. In those days each frame of the film had to be drawn by hand, so it was a most intense process.

The soundtrack was a Cab Calloway version of SJI.

For parts of the film Crandall drew over rotoscopes of Cab Calloway, in order to capture Calloway's idiosyncratic dance moves for Koko the clown - and the ghost that the witch turned Koko into. (There can be no doubt that Michael Jackson closely studied Calloway's moves.)

In 1994 Crandall's Snow White was voted into 19th place of the greatest cartoons of all time by cartoon animators. The Library of Congress, that year, selected it for preservation in the national film registry. The film is now in the public domain.

In 1999 the White Stripes started their adventurous interpretation of St. James Infirmary with the exclamation "Oh, Koko!"

If you are drawn in, you can find some pretty interesting stuff by visiting Rob Walker's (unfortunately now defunct but hopefully to be resurrected) blog NO Notes and entering "Betty Boop" in the search rectangle. Rob was/is fascinated by this bit of cinema, as am I.