The FIRST sheet music for SJI

I had been looking for this sheet music for years. It was as if the object did not exist. It was a legendary thing.
But eventually I did find it ... it was a stroke of luck, for I've never seen it again.
This is an important historical document. It had been printed in such small numbers that it must have become a collectors' item. I was certain of that.

I bought it for ninety-nine cents. Obviously, others were not as eager as I was.

The composing credit was to Carl Moore and Phil Baxter - both of whom are major characters in I Went Down to St. James Infirmary. The sheet music was published privately by Phil Baxter in Little Rock, Arkansas in 1925. Soon after, the publisher Harry D. Squires picked it up.  Squires convinced Fess Williams to record it (February 1927). That was the first recording of the song - which was next released by Buell Kazee in January 1928, and then - definitively - by Louis Armstrong in December 1928.

The sheet music with lyrics can be found elsewhere on this blog - just enter "Gambler's Blues" in the search box.
Posted by Robert W. Harwood at 15:37 No comments: 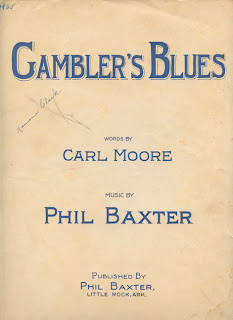 I have been looking for this sheet music for years. Dare I say, for at least a decade?! And it escaped me. It was as if the object did not exist. I mean, I read about it, and I even found evidence that it was locked in the archives of the New York State judicial library, as evidence in a 1930s lawsuit. But it was rare as the Dickens and I could never find the actual thing.

But two months ago I did.

I found it on ebay. The starting price was ninety-nine cents (plus postage), and there were two weeks left in the bidding. "Oh dear," I thought, "this is such an important historical document, one that has eluded me for a decade, and I am sure many people will be bidding for this. There is no chance that, with my meager resources, I shall be able to actually get my hands on this item." But, as you can see, I did win it. For ninety-nine cents (plus postage).

What an odd thing!! This was something of considerable importance to me. And I was the only one to enter a bid. Nobody else in the world cared. It was my golden grail. And nobody else cared. There were no other bids. And so I now possess (what I thought to be) a great historical document at a cost of ninety-nine cents (plus postage).

I must be deluded. I have been pursuing this story, this history of "St. James Infirmary," for over a decade. One of the critical links in the saga of this song appeared for sale, and . . . well . . . it sold for ninety-nine cents.

I shall have to ponder this.

Maybe history depends upon who writes the story.

The year on this music sheet is 1925. It was published by Phil Baxter in Little Rock, Arkansas. My research had informed me that "Harry D. Squires, Inc." was the original publisher of this song, and that Squires was the person who convinced Fess Williams to record it. So it is possible that Baxter released this edition before finding a bona fide publisher. Also, I had noted that Baxter and Moore neglected to copyright the song (thereby leaving the way open for "Joe Primrose" to take ownership of it). But "International Copyright Secured" is printed on these pages. I had found no evidence of this when I contacted the U.S. copyright offices, so I am not sure what this means.

The sheet music with lyrics is below - the pages should expand when you click on them. I leave it to you to compare this music with the versions of this song in Carl Sandburg's "American Songbag," published in 1927. Whatever this comparison tells you, it will be clear that neither Phil Baxter nor Carl Moore nor Joe Primrose nor anybody else wrote "St. James Infirmary." 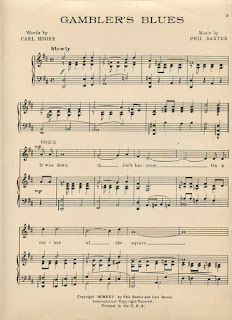 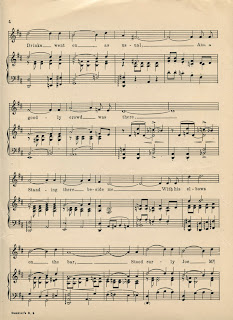 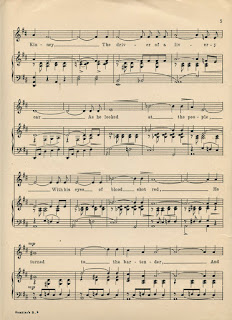 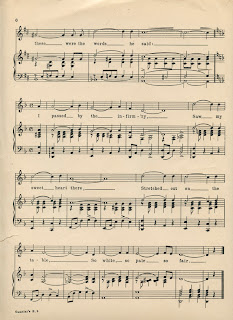 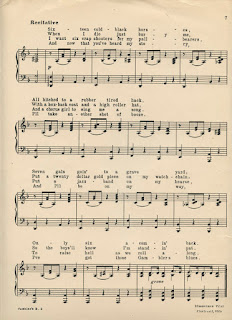