I have recently had some very interesting email exchanges with Max Morath, who I urge you to look into. I encountered him while ordering some sheet music that Mills Publishing produced back in 1924.

Irving Mills was, of course, Joe Primrose, pseudonymous and imaginary composer of "St. James Infirmary." Irving, along with his brother Jack, was also the proprietor of Mills Music, which early established itself as a purchaser and publisher of "blues" music. As I wrote in the book, I Went Down to St. James Infirmary, "Once it became clear to Irving and Jack Mills that there was money to be made from song copyrights, they were buying songs from black writers and reaping the profits from this newly popular musical form. . . . Musicians hoping to sell songs tramped the byways of Tin Pan Alley. They knew that if no one else would buy their songs, there was a good chance Irving Mills would."

As we know, Irving made a bundle off "St. James Infirmary" even though nobody in particular wrote it.

So I was intrigued when I saw this sheet music. This was the first time "Stack O' Lee" (or Stagger Lee, Stagolee, etc.) had been published, and I wondered if the Mills brothers were, back in 1924, attempting the same obfuscation they later performed with "St. James Infirmary." I mean, here was this old blues song, one that had arisen from the streets with no discernible original composer, being offered for sale as written by Ray Lopez and Lew Colwell. In fact, in a kind of synchronistic fashion, I had also been reading the recent book by Cecil Brown titled Stagolee Shot Billy (Harvard University Press, 2003) - an account of the history of the Stagolee song. Colwell wrote that, "In 1924 songwriters Ray Lopez and Lew Colwell published a sheet-music version called 'Stack O' Lee Blues.' This fact alone attests to the popularity of the song." (p 135).

I was surprised to find that this original publication of the "Stack O' Lee" song had almost nothing to do with its title. It is a silly dance tune which only mentions its supposed protagonist in the chorus: "Stack O' Lee Blues I don't know what it means. Come on honey let's be stepping, 'cause my feet won't keep still, I've just got to dance until I've had my fill. Stack O' Lee Blues. Play it over for me, I go crazy when I hear it, anywhere I may be, I long to hear them play that Stack O' Lee."

Here are some other lyrics: "Eeny, meeny, miney mo, they'll play some more, now let us catch a nigger by the toe, one more encore. We've got to left foot, right foot, hop and skip, Oh Lordy! hear that tune, ain't that a pipp . . ."

So, while this sheet music for Stack O' Lee wasn't an out-and-out ripoff, at least one of the authors had a history of entanglement in copyright issues. As recounted by one of the best music sites on the Web, www.redhotjazz.com, Ray Lopez had tried to copyright what is generally recognized as the first jazz record, "Livery Stable Blues," later known as "Barnyard Blues." The Original Dixieland Jass Band had neglected to copyright their smash hit, and Lopez scrambled to profit from it - although testimony showed that the Dixieland Jass Band had based their song on one of Lopez's earlier compositions.

Songwriting was like gold and prospectors everywhere were hoping to profit from it.

Here is the score for "Stack O' Lee Blues" as published in 1924. The pages should enlarge if you click on them. 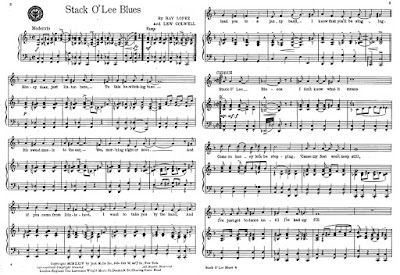 Good stuff, Bob. I've been sharing the link to your blog, as I think highly of it. I made a video of Allen Toussaint's instrumental version of St James Infirmary tonight: http://www.youtube.com/watch?v=x1R8VE9gV4w

Thanks very much, Doug. Your video is masterful; Touissanit's version of SJI is (like his entire "The Bright Mississippi" CD) suberb.
We have a musical trio here, a very rough affair; we meet once a week. One of the songs in our repertoire is your "Saskatchewan 1939."
(Anyone out there interested in hearing the original of this, or other D.L. songs, here's a link: http://www.myspace.com/dukelang

All the best, Doug!
RwH 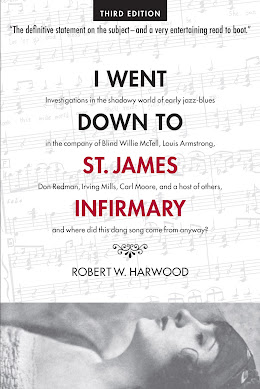